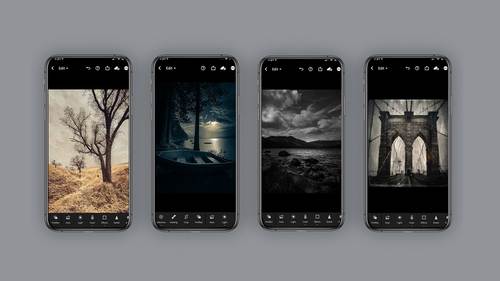 before we get into the actual mechanics of IPhone Ah, graffiti, the capture and editing. I'd like to talk about some tips for getting some more interesting captures or pictures. So first of all, and Paramount is to reconsider this device no longer. Please consider this your phone. All right. You want to consider it your camera and that being said, please look at it as something other than a snapshot device. And what I mean by that is my gosh, stop taking pictures from standing head height. That's what Ah, lot of people dio get low, change your perspective, experiment with different horizon lines. Uh, change your focal depth. We're gonna talk about how to do this during this boot camp. Most of the devices now also have the ability to change your depth of field. So I invite you to look at that and consider your lighting different lighting sources, either artificial light that you're adding or what direction you're actually shooting into. And, um, exposure with digital. You have such a wi...

I LOVED this class sooo much! Lisa did an amazing job of supplying a large amount of information balanced with a pace and teaching style so it wasn't overwhelming and so FUN to learn! Lisa helped me unlock so much potential in my device I didn't know was there. Everyone can learn from this class! Lisa is fun and real and you feel like you can connect with her. I am having so much fun with photos and have taken my images up a level with the education Lisa provided. TAKE HER CLASS, you will be so happy you did!!

Lisa, your classes are wonderful and inspiring. Even though I already have a fancy DSLR, I love experimenting with mobile photography and have just been getting into using Lightroom a lot on my mobile devices. There were many cool ideas in this course that I wasn't aware of. I'd highly recommend it to others interested interested in creative mobile photography. Thank you so much for providing the slides as a pdf download - they are thorough, well organized and easy to reference when it isn't convenient to open a video file.

This course is a step-by-step guide on how to create better, more impressive photos with Adobe Lightroom. In her charming and unique way, the lecturer explains the content in an easy-to-understand way so that people like me who have never used Adobe Lightroom before can achieve very good results. The course is rounded off by a very extensive and detailed workbook. Thanks to the lecturer for this wonderful course!