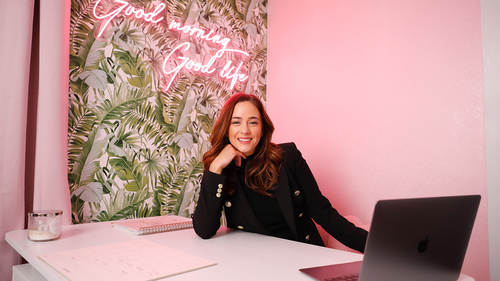 Amy advises on how to set boundaries with the people in your life—both personally and professionally—to increase productivity and even more importantly, self-love.
Show Transcript

The Challenges of Working From Home

Set Up Your Space

The 5 Habits of Productive WFH Communication

How to Do Everything You Want to Do

How to Take a Break

no is a full sentence. Isn't that so fun to say out loud? It's a lot harder to do in real life. I can completely relate. I love to say yes. I hate confrontation. I want everyone to be happy and I want everyone to like me and that will be my detriment. Have you found yourself fully at capacity, totally overwhelmed, juggling a million things and then when you took a second to look, you realized that none of what was on your plate was anything you were actually excited about or passionate about. And it was all because you said yes too many times in situations that you secretly wanted to say, no, don't you hate when that happens, we need to talk about the power of no and how, even though it is challenging in the moment, when you've got to say it, when you just got to say that word, it is one of the most beneficial things that you can do for your productive lifestyle. Here's my pep talk about saying no. We are also fascinated at our ability to say no more often, that we have put this two le...

Amy Schmittauer Landino is a bestselling author, keynote speaker, and the World&#8217;s #1 Productive Lifestyle Coach. With her award-winning YouTube series AmyTV and as Director at GATLUW House, Amy inspires women worldwide to chase their freedom and go after the life they want. Her work has impacted the lives of hundreds of thousands of people and been featured by prestigious publications such as Business Insider, Fortune, Entrepreneur, and Inc.
SEE INSTRUCTOR'S CLASSES

This class was a game changer for me. I have officially set up my complete calendar blocking system according to Amy's tips and what works best for me (which she preaches and I LOVE that, since no two people are the same)! This masterclass gave me the motivation I needed by helping me look inside myself and turn insight into "just do it" action. I have been on a journey this year to strive for more and now I can say I am truly on the path to living the life I want and live out my passion and purpose in this world. So grateful. Thank you Amy!!

This is a great two hours to spend in your day to make the MOST of the other 22. Invest in this class. I really appreciate Amy's well organized, well thought out and helpful strategies. Her gift is communication and she makes productivity accessible to everyone. Thanks for the class!

A super pleasant presentation, full of pieces of advice that I start to emplement with success. Thank you ! Pinky power rules !