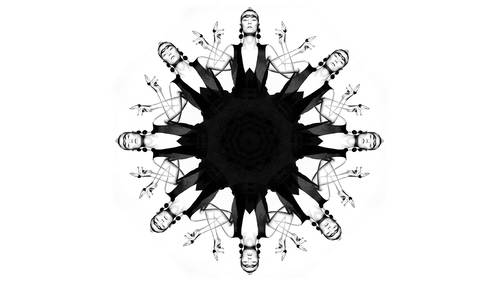 in this example. We're gonna take a look at blend modes for painting on makeup and how that works. So I'm gonna create a new layer, and I've decided I want to give her more eye makeup. I want to be purple. I wanted to be pink. I wanted to be saturated. Right now. She's got a little bit of purple, but it's kind of washed out. And so I can do this with blend modes. So I'm gonna grab a brush and I'm gonna pick what color I want her eye makeup to be. So just regular brush. And I'm gonna pick like pink purple, okay. And I'm gonna go everything 100% 100% of flow opacity. I'm gonna paint it on her eye where I wanted to be approximately. I can always fix this later. So somewhere here are So what happens normally is if you back off your opacity, it will always look like it's sitting on top. It's just this color hes like even when you're really low capacity. It just it doesn't look real. And you can tell because of the color cast and the haze you see over the eyelashes and things like that. The ...