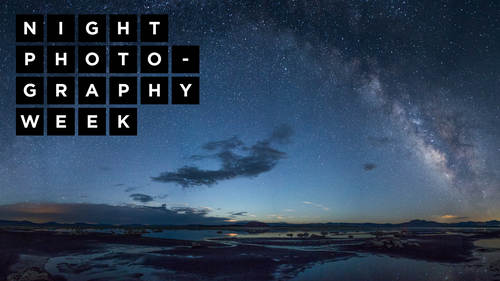 welcome. Everyone were at Creative Live very early in the morning for night photographers. I will just mention that we're usually just getting to bed right about now, but 9 a.m. Seattle time and we Matt and I are so excited to be back and recap our night photography week about a month and 1/2 ago, each one of the members of national parks. At night, there's five of us. We each gave a class than filled up a whole week with night photography tips, tricks, solutions and adventures. And we're just really, really super excited to be back and look at your images. Just a little recap of what we what we did that night Photography week I kicked off. The week was sort of our fundamentals class, giving you a good overview of all sort of aspects of night photography. We focused a lot on the gear, but we looked at sort of cityscapes, car trails, and then we went out to a Mount Rainier and kind of struggled with and talked about how we deal with weather, right? That was an overriding factor there on...

Join us as we welcome back Gabriel Biderman and Matt Hill for a night photo critique! In this free, live broadcast, you’ll get expert insight into improving your work and nocturnal techniques. Take the knowledge you’ve gained during our Night Photography Week and challenge yourself to capture star trails, light painting, dynamic landscapes, and night portraits.

I was floored with how much I learned in the critique class! So much information, clearly presented...with the amazing chemisty of these two friends Matt and Gabriel. I do hope you come to the FL Everglades or anywhere in the SE FL vicinity where we have to battle the light noise. I'm going to start learning/experimenting tonight!. Thanks for inspiring and sharing your knowledge with me.

I really enjoyed these classes. I have been working on improving my night photography, and these classes gave me some new ideas and tips to try myself. I especially liked the helps on how to shoot the Milky Way and foreground and combining them in Photoshop. The field experience, and then post processing work really helped pull it all together.

The two instructors are so engaging and passionate about night photography that it catches you at the start of the class and continues all the way through. I really enjoyed this class!