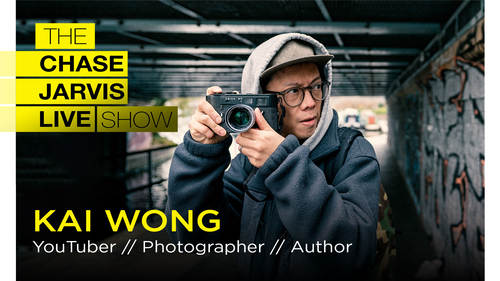 Hey buddy, what's up Chase! Welcome to another episode of the show. Very excited about today's guest. If you have been following me for any number of years, then you will not have forgotten an episode where I was given a lego camera and forced to make amazing pictures around the city of Hong kong. That invitation came from Kaiman wang legendary Youtuber, dear dear friend who has a bunch of new announcements, he's sharing the first time here with us on the show. I cannot wait for you to see this episode. Sky is hilarious, humble. He's got a new book, a new Youtube channel and get so much stuff cooking. Uh and we also get to take a walk down memory Lane memory Lane with respect to favorite cameras, favorite lenses. So if your camera nerd, this episode is going to be for you. Mhm, mm hmm. Yeah, no, hi wang is back in the house man, Thank you so much for being on the show. Welcome Welcome back. I don't know if I can say welcome back, because you have been on the show before, but we've done...

Kai Wong makes YouTube videos about photography, and has nearly a million subscribers and over 67 million views worldwide. Kai Wong was born and raised in the United Kingdom and studied film and media at University.
SEE INSTRUCTOR'S CLASSES