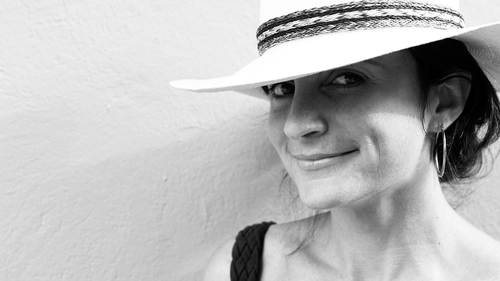 I really just wanted to talk about my beginnings to my own journey. And I'm actually one of the most unlikely people to be standing up here today, because if you knew me as a child, and even a teenager, I was incredibly, incredibly introverted, gawky, shy, and just afraid of the world. And my parents, bless their hearts, thought that maybe putting me in front of the camera, and dressing me up as a lion, might somehow give me courage, (audience laughing) but I never got my courage from being in front of the camera. Really, where I got my courage was the second I picked up a camera, I felt like superwoman. All of a sudden, I could go out and engage with people, and I had a reason to be there, and it just made the world a lot less scary. And then the more amazing thing which happened was after taking pictures. This is actually in Bangladesh, literally diving in to make a film about our changing climate, and it did give me these superpowers, really. When you put a camera in my hand, I turn...

CreativeLive is honored to welcome Ami Vitale. Ami will be part of our In Focus series and will present her insights into the world of photography. Please join us for this insightful discussion followed by a Q & A.

<b><p dir="ltr">After more than a decade covering conflict, photographer and filmmaker Ami Vitale couldn&#8217;t help but notice that the less sensational&#8212;but equally true&#8212;stories were often not getting told: the wedding happening around the corner from the revolution, triumphs amidst seemingly endless devastation.</p></b>
SEE INSTRUCTOR'S CLASSES

There are not enough stars in the galaxy to adequately express how much I loved this class. Ami Vitale is truly remarkable, both as a photographer and human. Having the opportunity to hear her speak and experience her work is a true treasure for which I'm immensely grateful to CreativeLIVE for sharing with us. Her dedication (and extraordinary talent and ability of) telling important stories, along with her empathy and care for people and this planet is palpable. Her words and work cascade straight into your heart. Thank you for this tremendous opportunity to spend an hour with this legend. Everyone reading this, stop reading and go and watch this NOW!