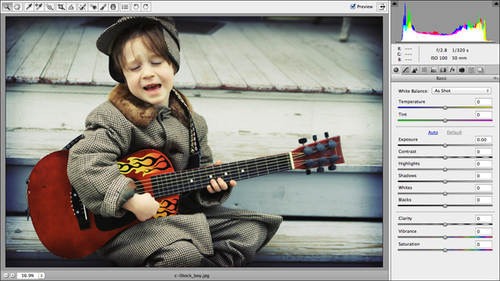 So what I want to show you now, when I open up a few images here in raw, I'm gonna go ahead and Enbridge shift click to activate the 1st 1 and then shift click to activate the next one that I want to open. And then I can just double click toe open both of them. Or, like I said earlier, control, open with camera raw or just press command or control. R when you open the image in camera raw, you might have noticed that exclamation point within the yellow warning triangle at the top right here. That was simply camera Roz way of letting you know. Hey, I'm still drawn The bar graph in the history. Um, give me a second. That's all that was. So you saw that little triangle appear momentarily, and then it disappeared. And if you're watching your hissed a gram really closely, you could see it move around just a little bit. Okay, So the first thing I like to suggest that you do when you start adding your images of camera raw is tell camera raw a little bit about your camera. Hey, there are such t...