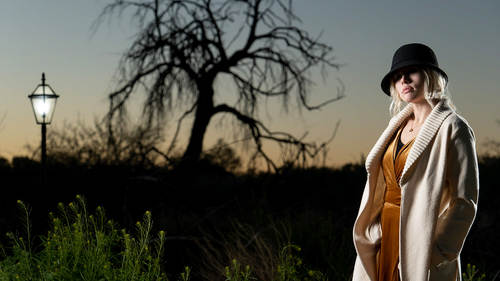 So now let's talk about the liquefy tool because the liquefied tool is very useful as well. Um, so I have an image here. I really like this image. It's kind of a dark, brooding image. I'm going to be in the develop module and I'm going to work on this image, so I just wanna I'm just going to do a little bit of work on this image. I'm not going to do too much work on it, But I love the way it looks like how her eyes air obscured in that on that shadow. So I'm loving the image. I just have to do a few little things to it before I send it to photo shop. So one of those things is going to be burn this right here, So we want to burn that down just a little bit. So I'm just gonna come in here, burn those down a bit like that. And then the other thing that I want to dio is I put a actually put a flash inside of this because it's just a old lamppost. So I put this flash inside of it, so they actually had light, but it it didn't light up the whole glass and needed frosted glass. So what I'm gon...