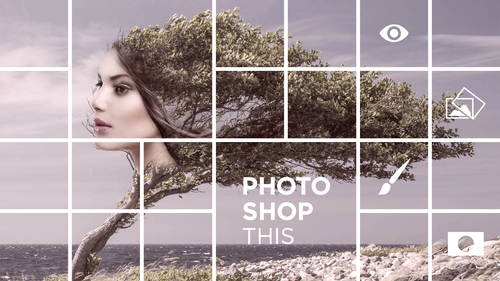 Adobe Photoshop > Photoshop This 2018 > Challenge #2 Sky Was The Limit

This one is called The Sky WAS the Limit. Now, this photograph was taken back in the mid 1800's. And they were still using Photoshop back then, even when Photoshop wasn't in existence. The problem was, is that the sky would never come in because, as we all know, the sky has a different temperature, or kelvin, than the rest of the ground. And so, if they could get the foreground in, the sky was pure white. Cause it would over blow, and just completely burn the glass plate. If they could get the sky, the foreground would be completely in shadow. And so, what a bunch of old time photographers would do in the 1800's is they'd go out on a cloudy day and take pictures only exposing for the sky. And they would just shoot hundreds of sky photographs. And they would put that into their studio banks. And then they would go out and shoot a picture like this, and go home and match the sky that they wanted for that particular day to the photo they shot, thus Photoshop was born. On glass plate negat...