Poetry, Vulnerability, and Finding Your Voice

Poetry, Vulnerability and Finding Your Voice with Jericho Brown 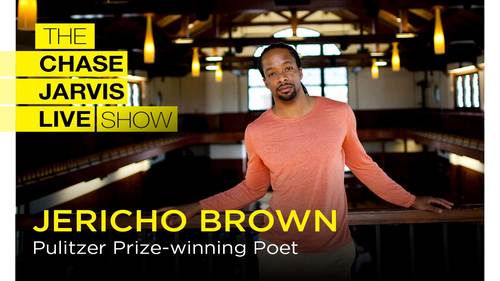 Poetry, Vulnerability, and Finding Your Voice

Poetry, Vulnerability and Finding Your Voice with Jericho Brown

Hey, what's up? It's Chase! Welcome to another episode of the Chase drivers live show here on Creative Live, you know the show where I sit down with amazing humans and I unpacked their brains with the goal of helping you live your dreams and career in hobby and in life. Our guest today is the one and only Pulitzer prize winning poet, Jericho Brown. Now dr Brown is an amazing poet obviously if you win the Pulitzer, but more than that he is a speaker of truth, we cover all kinds of things in this episode besides poetry. But the underpinning of this is how do you do something that is hard and difficult and beautiful and inspiring and the thing that is your calling in life, whether that is pursuing a life of words and academics and um trying to drive and change in popular culture or whether it's to leave the job that you hate to become or be something that you want more than anything else in this world. I think it's fascinating if I asked 100 people what they want to do, the number of peop...

Is it time to take the leap? Anyone you’ve admired, looked up to or emulated has, at some point, taken a necessary risk to move towards the living and life of their choice. Today, Pulitzer prize-winning poet Jericho Brown is here to talk about how he did just that, and the key to speaking truth through art.

Jericho’s advice for anyone beginning their journey struck me as profound, yet simple. What would a day look like if you were living your dream career/life/business? What you begin to realize is that there are things that you can do today, cost-free, to move towards that reality. “If you want to be a writer, then write for 5 minutes. Once you find 5 minutes, you can find 10, and 30, and once you are writing for 30 minutes a day you on your way,” Jericho says.

Jericho worked as a speechwriter for the Mayor of New Orleans before earning his PhD in Literature and Creative Writing from the University of Houston.

The New York Times Book Review notes his most recent collection The Tradition: “In Brown’s poems, the body at risk — the infected body, the abused body, the black body, the body in eros — is most vulnerable to the cruelty of the world. But even in their most searing moments, these poems are resilient out of necessity, faithful to their account of survival, when survival is the hardest task of all: “So the Bible says, in the beginning, / Blackness. I am alive.”

In this episode we talk about: