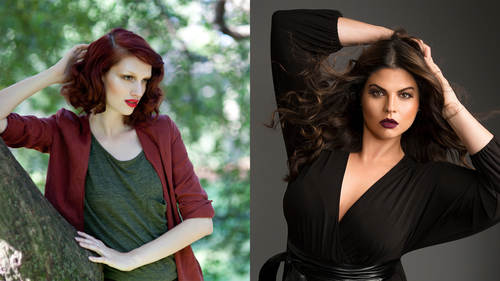 I'm Lindsay Adler. I'm a very frequent CreativeLive instructor, and I'm a portrait and fashion photographer based in New York City, so that's kind of my specialty. But because I started as a small-time portrait photographer, I've shot everything. I've shot engagement sessions, and children, and weddings, and maternity, and now a majority of what I do is cool complex lighting with beautiful models and hair and makeup, but a lot of my paid work kind of runs the gamut. So for the next, about two hours or so, I'm going to take questions, and some of the questions I have we've already gathered online, so I have some of those that'll be prompted up on the screen for me, but we're also happy to take questions from the online live audience. So guys, keep sending your questions in. And then also my lovely live audience, and it's great to have your energy and your questions, so send them my way. So you can ask questions about anything of the classes that I've done. It could be lighting, posing, ...

Lindsay Adler and CreativeLive held an open Q&A based on the lessons taught in Posing for Curvy Women, Fine Art Nude Photography, Posing 101 and Location Lighting 101. This experience includes questions based around posing, working with your subjects, and how your camera and lens choice can affect your posing opportunities. Lindsay will demonstrate with a live model and gear to make this a free course that truly benefits your catalog!

I love this class so much. Lindsay Adler’s lessons teaching how to pose like a supermodel: are so simple, direct, easy, straightforward, demonstrative; tell and demonstrate hints to pose like a supermodel eg. don’t pose realistic symmetrical angles/poses nor box/right angle poses of your body parts, but pose diagonal, non-symmetrical, elongated, chest leaned forward, leaned forward, abstract shaped, abstract structured, non-realistic shaped poses. I recommend all aspiring supermodels to watch and learn from this class.

I think a lot of times we over think the process of posing and Lindsey did a great job of showing just how easy it really is. Not only does she cover the "how to's", but the "why do's" as well. When you put it all together you learn the "flow" of posing. This class will take the over thinking right out of your head! It will make you feel confident in your decision making, therefore your client will feel confident as well.