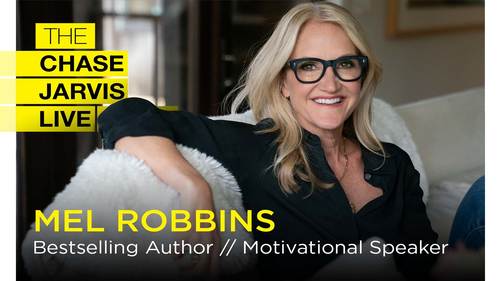 Hey buddy, what's up? It's Chase Welcome to another episode of the Chase Jarvis live show here on Creativelive. This is the show where I sit down with amazing humans, I unpack their brain with the goal of helping you live your dreams and career hobby and life. My guest today on the show is the one and only inimitable mel Robbins. Mel is one of the leading voices in personal development and transformation. She's an international bestseller. She's got four number one audible book of the year. She has just come out with the most recent book called the High five habit, which is a mechanism for transforming your life instant new york times bestseller. Her groundbreaking work on behavior change has been translated into 36 languages. She has done an incredible course on Creativelive that has and 55,000 students in it called How to break the habit of self doubt and build real confidence. This episode is incredible. One of my favorites of the past two years, a couple of things that we cover a ...

It’s been four years since I sat down for a chat with Mel Robbins, and our recent discussion will go down as one of my favorite podcasts for 2021. As a respected expert on personal development and behavior change, her insight is invaluable during a period of worldwide transition and—dare I say it—chaos.

She’s an international bestselling author, and she has some powerful strategies for leaving anxiety behind and getting back to creative, productive work. If 2021 was the peak of creativity and success for you, Mel’s advice will inspire you to set your goals even higher. If you’ve been sidelined by anxiety, depression, or overwhelming fear, her advice will help change your course for the better.

Who Is Mel Robbins?

You may recognize Mel for her book, The 5 Second Rule, or her massively popular TEDx talk, How to Stop Screwing Yourself Over. She’s an international bestseller with titles that explore everything from taking control of your life to discovering your personal power. Her most successful works focus on simple strategies to modify your behavior and change your thinking.

Mel’s newest book, The High 5 Habit, explores creative ideas to move away from self-doubt toward self-love, acceptance, and trust. She’s also the creator of a CreativeLive class that has driven thousands of students from all over the world to transform their lives.

The Nervous System vs. Creativity & Productivity

What does your nervous system have to do with your ability to focus or the creative ideas flowing into your work? Perhaps more than you realize. The nervous system is a complex network of cells and fibers that allow your brain to control your physical body. It also has significant control over the thoughts racing through your mind and the way you react to the world around you.

When you’re struggling with escalating stress and nonstop anxiety as most people are today, the nervous system can easily slip into overdrive. It may leave you feeling fatigued, frazzled, or just downright fed up with things outside of your control. In that state, it becomes difficult to focus and you may find creative thinking more challenging than ever.

It’s in that state that Mel Robbins believes many people around the world are in right now. Thankfully, she believes right now is also a great time to ramp up creativity and focus on improving productivity in whatever work we choose to tackle. She joined me on the podcast to discuss simple yet powerful ways that we can all do that, starting right now.

Beat the Overwhelm & Get Ahead – It’s Possible!

There are many people resting and waiting to see what’s going to happen in this world next. They aren’t producing creative works or insightful content. They aren’t applying for new jobs or jumping into career changes. They’re simply using current events as an excuse to take a breather. Others are soaking in anxiety and depression, which may seem justified by personal circumstances.

If that describes you, head over to the podcast and hear what Mel Robbins has to say about it. She just may convince you that now is the best time ever to beat anxiety and start creating. She’ll even give you some insightful strategies to get your focus back regardless of your current nervous system state.