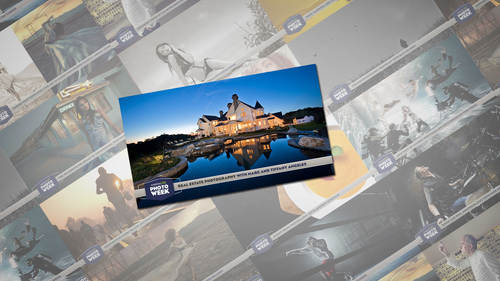 we are excited to be here. Thanks so much. We were even mawr excited to tell you about this business model and how you can make a ton of money doing real estate photography and how you can really enjoy your lifestyle with this really great business model. So real estate photography it is. We'll get started. So you want to hear our story a little bit about her background, have been married for 10 years. I got married when I was 12 clearly and at 10 years ago we were like, We need to start a business because we both had corporate jobs and we knew that we were going to start a family, which is 10 years now in the making. It was a lot sooner, but 10 years later we're ready, and we wanted to start a business that would be family friendly and that we could work from home and still create a great income. Yes, so we worked both in corporate for 10 years, and we didn't want to be in the rat race in or so we looked at all these businesses, like all these different business models, So she has a b...

Dive into the world of Real Estate Photography and learn everything you need to know about success in this genre. Whether you want to make a career out of photographing real estate or you just want to add another revenue stream to your business, Marc and Tiffany Angeles will show you how to get the clients, the best practices for photographing properties and how to turn this small niche into big money. Learn how to make your small portable flashes have big impact and how to light effectively for minimal post-processing. What you learn in this class about lighting spaces will serve you well in all your photography endeavors.

For the price, I would recommend this for basic tips & tricks to go out and experiment with. For an absolute beginner of equipment, you may need a course on using camera, flash, wizards, etc. before finding this valuable. I have been asked to do some real estate photography recently and was looking for best practices and tricks on things such as bathroom's (tight spaces) and such. Also on lighting rooms and spaces. For $20 (that I paid) I think it was worth the insight, however, I would pay $90 for a course that did a preliminary walkthrough like what was presented, then perhaps some focus on pricing models with handouts available even as examples (how to present to the client) and even if the numbers were null, a model for starting at XXX adding XX per sq. foot, per picture, per scenario. Everyone lives in different real estate markets and not all of us are shooting as high end houses... so actual pricing wouldn't be relevant. However, like I said, a pricing model would help. Many of these reviews were negative for what one could get out of the course.... like I said, it was worth $15-20, not much more as it was simply a powerpoint style presentation, zero handouts. Handouts would have boosted the value of the course by providing equipment lists, pricing model examples, and perhaps a shots list incorporating important seller points. I did like how they went over shooting views of what it is like to LIVE in the house and then shots OF the house. I felt that was a valuable tip for a piece of real estate that has those potential views. I liked the casualness of the couple, they talked just fine together (not sure what those complaints were about) - I only wish that this was a meatier course, handouts again, would make it that much more appealing. :)