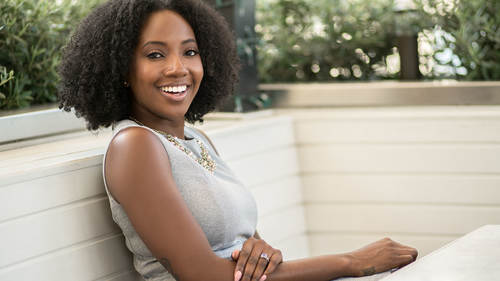 And so, let's talk about dispelling negative mindsets because we're talking about mindset and what I have found is that depression and thinking negatively about yourself causes you to spend more money, but it also sets forth, I strongly believe that money is energetic, and we attract and we have and we experience what we believe. If we begin to believe in negative things about money, we can create a negative experience, even when things are positive. We might only see the negative because we've tuned ourselves to only see the negative instead of embracing the positive or looking at the bright side of things. So, this is actually one of my favorite shows, it's from "Insecure". The main character gives herself these pep talks. Sometimes she's just expressing frustration, other times it's a pep talk and we all need to have a pep talk with ourselves but unfortunately a lot of times when talking to ourselves we're not talking to ourselves in a positive manner, we're talking to ourselves neg...

atively. And people engage in negative self-talk for a variety of reasons. One is because it's a learned behavior. If we watched our parents kind of beat themselves up or we watched our teachers, or we watched adults or people that we look up to, we watched peers, it becomes a learned behavior where we think it's okay to talk negatively to ourselves. It's socially acceptable. How many times have we heard someone say, she talks so bad about herself and said it negatively rather than she thinks so highly of herself. It's almost like high self esteem, or talking positively about yourself is frowned on more than actually talking negatively about yourself. And self-deprecating is a thing that people are comfortable doing but it also has its negative impacts on how you perceive yourself and money. And then defense strategy. Sometimes I'm gonna talk bad about myself before anybody else has a chance to. Or I'm gonna believe the negative things are happening to me or I'm only capable of having negative experiences without even getting my hopes up because I don't want to be hurt by the disappointment and I don't wanna be disappointed in the outcome, so I'll just look for the negative so that I'm not optimistic about the positive, potential outcomes. And then a negative perception of self. Some people just have a negative perception of self. When I started My Fab Finance there were a few negative mindsets that I realized that I had when it came to money and a lot of it did come from, it was socially acceptable. Most of the people in my social circle were struggling with money, and so it was socially acceptable for me to be like, girl, yeah I am broke with a capital B. It was socially acceptable for me to look at myself in that manner. And as a defense strategy, and also as a negative perception of self, so when I started my company I was leaving an abusive relationship. And in leaving that relationship, outside of the physical scars, there's also a lot of mental scars that come along with those relationships, so I had to kind of reclaim myself and undo some of that negative self-talk that I was engaging in. So I want you to think about a few negative beliefs either you've adopted about money, or you've heard about money. So it doesn't necessarily have to be, you can just shout 'em out to me. What are some of the negative things that you've heard or adopted when it comes to money. I'll never have enough money. I'll never have enough. It's the root of all evil. Mmm, yeah. It's hard to make money. Yeah. Oh, these are negative. I've reset my mind to think positively about it. She says, I don't even think about negative stuff anymore. I don't really practice the negative anymore. We don't wanna continue down that path then, (group laughs) if it's not happening, if it's not clicking. We'll go to the next person, online? (laughs) Money doesn't grow on trees. Money doesn't grown on trees. That is something, I think we've all been told that, especially when we ask for things as children. John says money makes you greedy, or money changes you as a person, in a negative way. Yeah. So when we talk about all of these things, like, why would you want money? Why would you want this thing that contributes to all these negative experiences? If you've programmed yourself to believe that this is what money does to you, this is the type of experience that money creates. And subconsciously, the reason it's important to address your money mindset in these beliefs is that subconsciously you might not say it on a regular basis, but it starts to guide the way you interact with money. If you believe that having money makes you greedy, or accumulating a certain amount of money makes you greedy or makes you a negative person, why would you want to see your bank account balance grow and flourish? Or if you believe that money doesn't grow on trees or that it's hard to make money, why would you work as hard in finding options and different ways to make more money, because you just automatically have this belief that no matter what I do it's going to be difficult for me to bring in money. So before I move on to the next section I would definitely like to take any questions because I know this is more so challenging what we believe and challenging what we've experienced and I definitely want to address any questions that you all might have or any questions that anyone in the studio audience might have. I think that one of the things that people have asked me, and we're gonna dig into this, is okay, yeah, I think negatively about money, but what happens if my reality has always told me these negative things about money. If you've always seen people around you struggle, if you've always seen people not have enough and it really is attuning to... but what are the examples of plenty in your life? We talked about values in our last class and most people value family. So why can't we focus on the things that they do have in their life because when you focus on things you allow other things to flourish and grow in your life. So if you feel like no matter what you do, you know what? Okay I'm gonna change my mindset about money, I'm gonna change my mindset about money. I don't think it's gonna work, Tonya, I'm gonna change it anyway, I encourage you to challenge yourself to think more positively and when you feel like that negative money script is coming up, create something different. And we're actually create positive affirmations scripts because I'm a walking positive affirmation script. (laughs)

Throughout our lives, we focus on building strong, positive connections with family, friends and partners. But we tend to neglect one of the most important relationships we have—our relationship with money.

How we view, handle and treat money has an enormous impact on our lives. Out-of-control spending, financial worries and too much focus on pursuing wealth can affect our happiness, well-being and our personal relationships.

Author, consultant and millennial money expert Tonya Rapley will help you create a healthy, harmonious rapport with your finances—no matter what your bank account balance is. You’ll learn how to develop a positive mindset even when challenges arise, understand how money worries are hurting you and tap into the joys in life that money can’t buy.

Amazing teacher, she uses a simple language and gives you examples you can relate to and stress out how important shifting our mindset is the foundation of our financial freedom. I loved it and never really thought of money that way.

Concise and easy to digest and pleasant to follow along. Tonya offered some simple exercises and powerful tools to reexamine one's relationship to money.

This class focused on money mindset. I loved the examples for how to turn your negative self talk into positive affirmations.