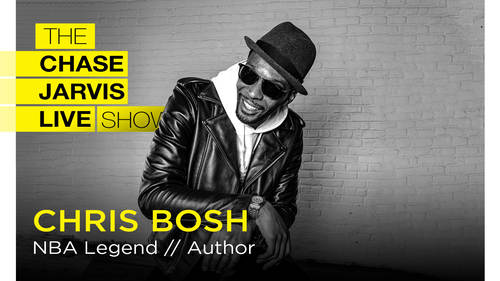 Harry, What's Up His Chase. Welcome to episode of the show. This is where I sit down with amazing humans unpack their brains with the goal of helping you live your dreams and career hobby in life. Today's guest is the one and only the inimitable Mr chris bosh. 11 time NBA All Star two time NBA Championship gold medal Hall of Fame, insane athlete. And he has an amazing book that we get to talk about called Letters to young athlete. Now this is not just about sports, although he's an insane sports figure. This is about lessons for life, for business and for changing your life to the life from where you are right now, to the life of your dreams. There's so many the same principles that chris invoked. He has a handful of pillars we talk about in this episode, some of the pivotal moment, some of the pivotal moments in his life uh and with some very very tactical advice things at what he does to visualize. For example, very specifically, um, that you can take away. So I'll get out of the way...

Chris Bosh fell in love with basketball at an early age and earned the prestigious &#8220;Mr. Basketball&#8221; title while still at Lincoln High School in Dallas, Texas. A McDonald&#8217;s All-American, Bosh was selected fourth overall by the Toronto Raptors after one year attending Georgia Tech.
SEE INSTRUCTOR'S CLASSES