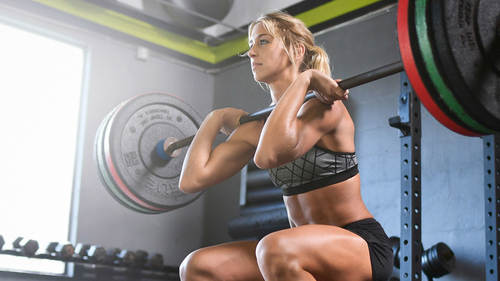 So we'll just do two strips on the back without the grids, and our five foot octo's getting retired. We got our subjects doing some pushups and stuff, I love it. Here's a little tip, honestly when you're photographing athletic subjects, I went down to Modell's or a sporting goods store, and I got just the resistance bands. And you can have them do like tricep exercises and curls and some pushups and sit ups to get that pump going, to get the blood flowing through your muscles. And then it reads on camera, that little more swelling that you get. So anyone into fitness photography or athletic photography, your subjects might be doing a little workout before you get them on camera, and that's gonna make all the difference in the world for the photographs. Also, don't eat a bunch of pasta the night before a fitness photo shoot, that's another thing to stay away from. Alright, so what we've made here, let's start talking about what we're doing. I've got a custom box here that we made, it's ...