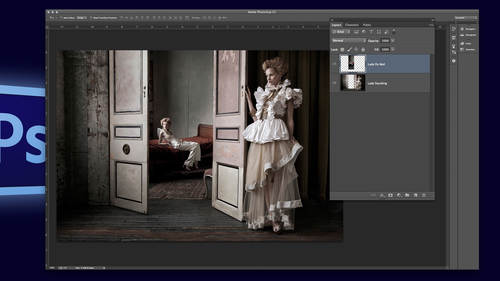 So when I was planning this class, we're trying to figure out what to teach today, they actually kind of gave me free rein to teach whatever I want, which is really nice. I like that, um and I was looking over what other people were teaching, like other topics that were being covered, and a lot of it was I mean, don't get me wrong like great content, but I didn't see much teaching of, like, creative part of photoshopping mean it's all creative, but how it plays such a fundamental role for us as photographers now, I mean, many people their entire styles are based on photo shop, so one of our creative live alums and one of my best friends, brooke, shade in, for example, you know, her work photo shop is absolutely integral to that, and I feel like people don't talk about it a lot when I was in college, which wasn't too long ago, but it was long enough ago that there were different really photo shop classes I did take, I had a degree in photography, business and political science, okay, so...

Creating images with Photoshop in mind can help you create scenes and effects that are otherwise impossible to achieve. Fashion photographer Lindsay Adler will show some of her favorite shoots where Photoshop has become instrumental in the expression of her vision. In fact, she shot these images knowing that Photoshop would bring them to life. Photoshop was a forethought, NOT an afterthought!