Lesson 1 from: Stop Living On Autopilot 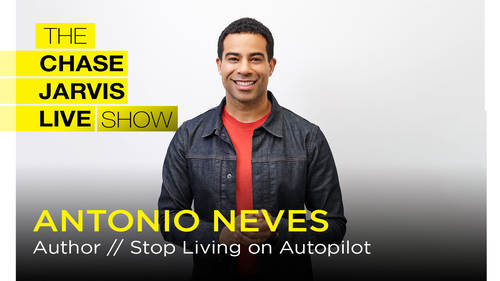 Lesson 1 from: Stop Living On Autopilot

Mhm. Mhm. Yeah. Oh, we love you. Good morning, Internet. How's it going? Welcome to another episode of the show. I'm Chase Jarvis. You know the show. This is where I sit down with the world's top creators, entrepreneurs and thought leaders. And I do everything I can to unpack their brain with the goal of helping you live your dreams in career and hobby and in life, we are live today. I'm very excited to welcome my guest. Antonio Neves is an author. We're gonna talk about his new book today. Uh, he's the host of the best thing podcast. A renowned speaker. I've seen him speak in front of huge crowds. Places like Big Omaha and my favorite places to go speak in front of lots of corporate clients like Google and others. He's also a success coach confession. I've I've asked for his favor a couple of times behind closed doors when I've been stuck. Uh, and he spent hundreds of hours in front of live television cameras where he was a host, A couple of national television shows. He's a dear frie...

Antonio Neves is an internationally recognized leadership speaker, author and award-winning journalist. Antonio is the author of three books and his next book, Stop Living On Autopilot: Take Responsibility for Your Life and Rediscover a Bolder, Happer You, was published by Penguin Random House (Rodale Books) in January, 2021.
SEE INSTRUCTOR'S CLASSES