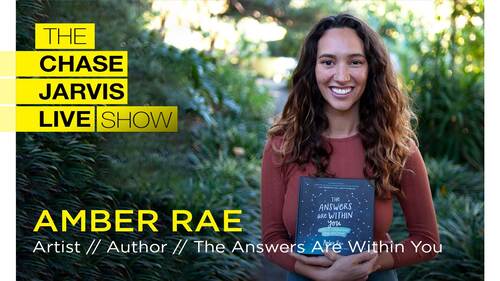 Hey everybody, what's up? It's Chase. Welcome to another episode of "The Chase Jarvis Live Show" here on Creative Live. This is a show where I sit down with amazing humans, and I do everything I can to unlock their brain with the goal of helping you live your dreams in career, hobby, and life. The guest today is the one and only Amber Rae. Her second time on the show. The first time we talked about her book called "Choose Wonder Over Worry." Today, we are inviting her to share a completely new chapter in her life, reorientation around her work, her values, and specifically a new book called "The Answers are Within You." It's an unreal conversation. And believe me, she has been in The New York Times, Today, Self Fortune, Forbes, Entrepreneur. Her writing has been everywhere and for good reason. We cover things in this episode like how to relate our internal world to how we show up for ourselves in the real world. Four steps, for example, that she went through in taking an entire break f...

Have you ever felt just “off”? We don’t always know what it is, but we can sometimes have a feeling that something in our lives isn’t aligned with who we really are. That moment happened for Amber Rae and it sent her inward to listen, re-evaluate, and just be. If you’re not familiar with Amber Rae’s work, she is a global advocate for emotional well-being and self-discovery. She turns this highly insightful wisdom into art, best-selling books, and engages audiences world-wide. In there latest book, The Answers Are Within You, she explores how aligning with your true self is the best way to find peace and takes readers on a journey to the answers they seek.

What does it mean to be in alignment?

Being in tune with yourself means honoring what you know is true and what makes you happy. We betray ourselves when we fall out of alignment, causing all sorts of woes. Acting from a place of alignment feels fulfilling and energizing.

Being in alignment with our true self means that we don’t define ourselves by what other people say about us.

Why is it important to be in alignment?

When we’re aligned with our true self, we’re loving, open, and compassionate. We act from a place of authenticity, which makes us feel good and brings us joy.

A person who is true to themselves is more creative and able to express themselves, is less agitated, and has less stress. They have more self-discipline and self-control, and more peace and contentment.

When we’re in alignment, things feel effortless and we can accomplish much more and be more productive.

How can we tell when we’re not in alignment?

When we’re not aligned internally, we feel restless and anxious. We force things and lose connection to what makes us feel alive. We experience mental, emotional, or physical health issues. We tend to repress our true feelings and hide what’s going on in our lives. We can no longer dream of what’s possible for us. We feel miserable and know that something is off or not quite right. In simple words, we don’t feel like ourselves anymore.

How can we realign with our true self?

One of the greatest gifts we can give ourselves is to reconnect with who we really are because we came into this world to grow and experience joy in our unique way, rather than playing by someone else’s rules.

It’s not easy to stay real in today’s world where many people live their lives for others, but we can all start with small steps that can help us live more authentic and joyful lives.

Here are some practical ways you can try to connect with your true self and find inner peace.

Spending at least 30 minutes alone every day can do you a lot of good physically, mentally, spiritually, and emotionally. It allows you to relax and reflect on how your true self is different from who you’re now. It gives you clarity.

Most of the time, the answers and clarity we seek are already within us. Ask for inner guidance and give yourself time to be quiet if you want to receive it. Just sit in silence, meditate, go for a walk, or watch a candle burn.

2 – Tap into your intuition.

Amber describes what intuition feels like in her new book:

Intuition feels like a clear knowing felt from deep within. Intuition isn’t focused on the past or future; it’s intent on the present. Intuition may come in the form of a quiet, gentle whisper or “hunch” felt in your body. Other times, it may shout “NO” to get your attention, signal danger, or help you avoid making misaligned decisions. To access the wisdom of your intuition, consider the question that’s in your heart. Then, take a few deep breaths, close your eyes, and tune in: Does this choice feel contracting or expansive? Does saying “yes” cause me to feel delight or dread? If money wasn’t a consideration, would I still say “yes”?

3- Review your boundaries and start respecting them.

Do you know your true needs and desires? Do you honor them? What things do you do just to please others? Do you find it difficult to say “no”? Do you feel guilty when you decide to put yourself first? Take the time and space to think about your boundaries and start respecting them. If you respect your own boundaries, others will respect them too.

4- Give yourself a physical and mental break.

It’s almost impossible to find your true self again if you’re hard on yourself and blame yourself for what went wrong. Let it go and give yourself a hug. Tell yourself you’re doing the best you can. If you need a break from social media, take it. If you need a vacation, take it.

Don’t let the fear of losing your followers or the opinions of others keep you from doing the right thing that works for you. If you practice self-love and self-care, it’ll surely pay off. Keep reminding yourself that you’re imperfect, yet worthy.

You are headed in the right direction

We get frustrated when we’re not at our best. But we should know that no one can stay in alignment forever. We all experience contrasts in our lives from time to time that can cause us to fall out of alignment. The key is to not lose hope and to engage in practices and activities that can help you get back to the “real you.”