That Will Never Work 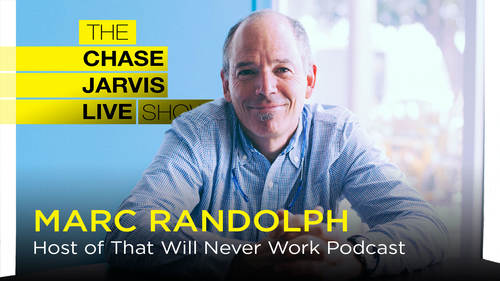 That Will Never Work

Hey everybody! What's up? It's Chase. Welcome to the episode of the chase Jarvis live show here on Creative Live. You know the show where I sit down with amazing humans and today's amazing human is Mark Randolph, co founder and the very first Ceo, to that little company we love called netflix. If you are at all interested in um starting something, starting an adventure, a company pursuing something and there are people in your world telling you that that won't work, that that's not a good idea then this episode is for you. In part, we're going to talk about Mark's Book called That will Never work his podcast by the same name where he gives advice and helps people understand that the people who are telling you that it won't work, they are full of it. Um those things are I think foundational to the episode, but also um I think this there's this um stories around netflix founding when they were running out of money, 50 million in the hole and trying to sell it to blockbuster and blockbust...

How many of us let what others think and say dictate the way we value our ideas? Does hearing no discourage you? How about when someone tells you that what you’re working on will never work? This week’s guest has literally made a living as an entrepreneur, being told that his ideas would never work every step of the way. Marc Randolph is the cofounder of Netflix, author of the book, “That Will Never Work,” host of the podcast “That Will Never Work,” serial entrepreneur, investor, advisor, and mentor to young founders. Marc would be the first to tell you that the ability to receive critical feedback positively and constructively can be the difference between expanding on your idea and watching it fade.

We discuss Marc’s backstory, and how he came to discover his own entrepreneurial spirit. Marc speaks on the importance of communication and brutal honesty both at home and in the workplace. We talk about developing company culture, delegation and workflow, and the balance of freedom and responsibility within a company. Other topics covered include: