The Stories that Hold Us Back 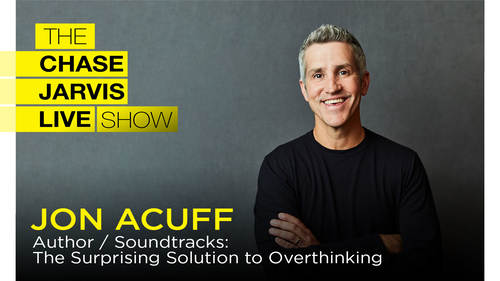 The Stories that Hold Us Back

one of my favorite speakers of all time, you know when you go to a trade show in someone's on stage in front of a few 1000 people, one of my favorites of all time is a man named john a cough Now john is a guest on the show today here at the chase Jarvis live show on Creative Live and if you're new here, this is a show where I sit down with the world's top creators, thought leaders and entrepreneurs and I do everything I can to unpack their brain with the goal of helping you live your dreams. And so today's guest is john a cough john among many other things and being an amazing speaker. He's also got a new book called Soundtracks and in short, if you have self talk that doesn't always work for you and I want you to know and john wants you to know that you can change that. You can reprogram those thoughts, those words into actions that help you in this conversation. We also talk about a few things like if you have childhood trauma or even adult trauma, there's all kinds of ways that that...

Your thoughts aren’t something you have, they’re something you hone. It’s a double-edged sword; optimistic, enthusiastic thinking compounds over time to create amazing things, while a multitude of mental woes can dampen our willingness to go bigger. Jon Acuff, author of Soundtracks: the surprising solution to overthinking, and one of my favorite speakers, is here on the podcast to give us a lesson on how to address negative, repetitive thoughts to steer us towards our goals and dreams rather than away from them. It’s incredible what becomes possible when your mental energy is applied in the right direction.

If you’re not aware of Jon’s work, he is the New York Times bestselling author of seven books, including his most recent Wall Street Journal #1 bestseller, Finish: Give Yourself the Gift of Done. He’s an INC Magazine Top 100 Leadership speaker and has spoken to hundreds of thousands of people at conferences. I had the pleasure of seeing him on stage and he knocked me back with his unique blend of humor, honesty, and hope.