Transform Your Mind in 12 Minutes a Day

Transform Your Mind in 12 Minutes a Day with Dr. Amishi Jha 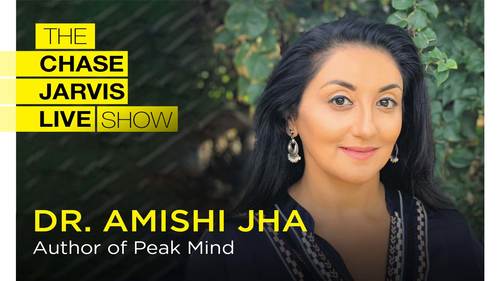 Transform Your Mind in 12 Minutes a Day

1. Transform Your Mind in 12 Minutes a Day with Dr. Amishi Jha Show Transcript

Transform Your Mind in 12 Minutes a Day with Dr. Amishi Jha

Hey buddy, what's up? It's Chase Welcome to another episode of the Chase Jarvis live show here on Creative Live. This is the show where I sit down with the world's top experts and unpack their brain with the goal of helping you live your dreams in career, hobby and in life. My guest today is the one and only dr um Ecija doctor um Ecija is a neuroscientist who focuses on meditation, mindfulness and awareness. Now if you know anything about the show or me personally a huge fan of this field of thought and I would I would remind everyone that of the hundreds of guests that I've had on this show. The most common trait of high performers is that they have some sort of an awareness meditation or a mindfulness practice, even if it's short and in this episode Dr amy she's got a new book called Peak Mind and she has reduced this scientific compression of this down to you can do this if you can find minutes in a day, your life will be remarkably demonstrably scientifically better. Also if you w...

Dr. Amishi Jha, the acclaimed author of Peak Mind, and a professor of psychology at the University of Miami, joins the show to discuss the importance of teaching our brains to be focused, aware, and attentive. The big question being asked: what can we do to strengthen the brain’s function? This is an area that Amishi has been studying ever since she received her PhD from the University of California-Davis and received her postdoctoral training at the Brain Imaging and Analysis Center at Duke University in functional neuro-imaging.

On average, a person is paying attention 50% of the time. The number 50% is a consistent statistic across many studies. The human brain is built to be distracted, AND we live in a society filled with distractions. Attention is a precious commodity these days.

Learning to be a peak performer

But there are exceptions among us. Peak performers have taught themselves to remain attentive, stay in the moment, and be aware. Take for example professional tennis players. During a match, the announcers might commentate that the player is “in the zone.” Rather than be distracted by the crowd’s cheers, people wandering to their seats, or their opponent’s loud grunting noises, they are able to brush off these distractions and focus on each and every point. Despite incredible mastery and physical fitness, at the peak levels of athletics, winners are often decided based on these core abilities.

If you want to perform under pressure, when it counts, you need practice. Think about first responders who are called to the scene of a burning vehicle with someone inside or underneath. Experience and training allow them to focus their attention directly on the task at hand. In this case, lifting the vehicle off of the victim under chaotic circumstances like ambulance sirens, crowds gathering, or people crying.

The third example: game show contestants. The combination of answering questions both quickly and accurately is honed through realistic training. Memory and a wide breadth of knowledge are critical, but are often neutralized by external sounds, distractions and the pressure of the actual competition. Many past winner have referenced their own techniques for creating realistic circumstances to train in. Practice doesn’t make perfect. Perfect practice makes perfect.

Why is it important to pay attention? Attention fuels success. It is the gas tank of your mind. Having a peak mind, says Amishi, provides you with the capacity to cultivate all of itself, to use that fuel wisely, stave off distractions, and have a sense of fulfillment. Think of those tennis players, first responders, and game show winners.

What can you do?

Are you willing to train and spend time practicing these skills? I’ve heard from thousands of listeners who want to. They want to live a richer life. As Amishi said to me: Go to the mind gym. But once you are there, you have to do the actual workout and train. For 12 minutes a day, focus, notice, and re-direct your attention. Think of it as a flashlight that you direct. Soon enough, your mind will wander away. But once you notice it, simply re-direct it back and keep repeating it.

All of us want to train our attention with mindful awareness and maximize our human potential. It’s no secret that anyone can do this. It’s available to all of us. The question is: can you squeeze 12 minutes into your day to become a peak performer?

Dr. Amishi Jha is a professor of psychology at the University of Miami. She serves as the Director of Contemplative Neuroscience for the Mindfulness Research and Practice Initiative, which she co-founded in 2010.
SEE INSTRUCTOR'S CLASSES