Lesson 4 from: Up To Speed With Photoshop 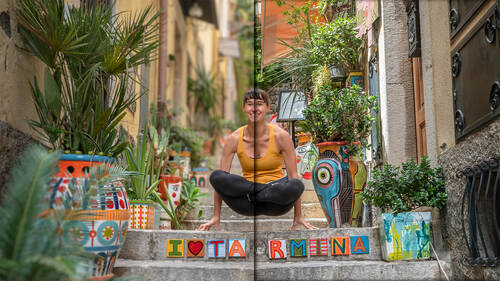 Post-processing > Up To Speed With Photoshop > Sky Replacement

Lesson 4 from: Up To Speed With Photoshop

You now have additional controls to refine the transition between thin objects and your replacement sky. The new Edge Lighting Slider produces a special group for a more refined result.
Show Transcript

Now, let's take a look to changes they've made to the sky replacement feature. Because now we can get cleaner looking edges anytime you have something that has really thin objects like telephone lines, or you have anything that's out of focus or in motion where something will be partially transparent, where you can see through it to the sky that's behind. So, let's dive in. Here's an example and in the case, the tree in the background is not in focus. We only have narrow depth of field where the frontmost object is in focus, that tree is soft. So, let's go to the Edit menu and let's choose Sky Replacement. And it's not gonna matter which sky I choose really. We'll still see the effect but I might as well choose one that will make it pop out. Now, in sky replacement, there's one new feature and that is down here, we have the choice of foreground adjustments, which is not new. But what is new is this slider called edge lighting that hasn't been there in previous versions. Previous versio...

ns would be the equivalent to taking edge lighting and turning it to zero then you'll get the same results as an old version. So, let's zoom up on where this sky goes behind the tree. If I zoom up, you'll notice that the tree feels like it's got kinda white fading in on the edges and that's cause we used to have a more overcast light sky. And the area that would be partially transparent where the fade out is and the blurry edge of that tree is where we're having the issue. Well, that's exactly what edge lighting is designed to deal with. So, with edge lighting, all we need to do is take this slider, and bring it up, and watch the edge where that tree is. Once we get it up high enough, in fact, let's just get it up at the default, which is 70. You can see now the edge looks much better, but you might need to push it even further. I might push it up here to more like 90 on this image. But if you compare that to what you got when it's at zero, which is what the old version would give you, I think it's much better. So, let's actually look at what we get when I click on OK because it's gonna deliver some different layers than when it gave us in the past. If you look at my layers panel, in the past, we would get a group. And inside that group, would be our new sky with a mask on to limit where it shows up. Then there would be this called foreground lighting and there would be this layer called foreground color. Which wouldn't be there would be this, edge lighting group. If we open that, you're gonna find that inside of it are two layers. Let's take a look at what those layers are. Well, here is a levels adjustment layer. And that levels adjustment layer has the exact same mask that the sky has above, which means this level's adjustment layer can only affect the area where that sky is showing up. But because there's a layer up here above that actually contains the sky, that sky is completely covering up whatever's down here except where there are shades of gray in this mask. Let's go actually look at this mask. I'm gonna hold on the Option key. That'd be Alt and Windows and click on the mask. And you notice on the edge here, you can see shades of gray where it fades out. Well, wherever this is solid white, this sky completely covers up whatever this level's adjustment is doing but where you can see shades of gray in here. That means that that sky is not completely showing up in those areas and that's gonna allow some of this level's adjustment layer to show up. So, let's stop viewing the mask and let's take a look at what levels is doing. Well, levels is coming up with a histogram that is only of the area that had the old sky because this mask is saying, "Hey, only work up here where the old sky is." So, it's working on our original version of the picture and it's saying let's adjust the sky. Is bringing in this slider, which forces areas to white until it touches the histogram and this slider until it touches the histogram. What that does is adds contrast. It makes sure the brightest area is white and the darkest area is black. But that's not what's really important. What's important is this. The blending mode on this is set to multiply. Multiply means print this as if it's ink. And Photoshop thinks this layer contains whatever the result of this adjustment is. So, it thinks what's in this layer is just a higher contrast version of our original sky. But it's set to multiply mode, which means print like ink. That means kind of like double up the density that the sky used to be in that area. Then notice the opacity, it's at 90%. Well, you remember that slider we had in sky replacement? All it does is change this number. And I left it at 90 when I clicked OK. The default would've been 70, which would've set this to 70%. Then above this, we have another adjustment layer. This adjustment layer is human saturation and it's turning the saturation all the way down. That would cause this to be a black and white image. Well, it's also got this little down pointing arrow turned on, which means it's using the same mask as the layer that's below. So, that just means that little transition area won't have any color added to it. If you turn that off, it'd probably be too colorful around that edge, although you might not notice in this particular image. But that's what's new in the sky replacement. And I think it does a really good job. You're only gonna notice it though when you have an edge that is either outta focus like this one, it's got some motion blur to it, or it's extremely thin like telephone lines. Then that's really gonna help the end result.