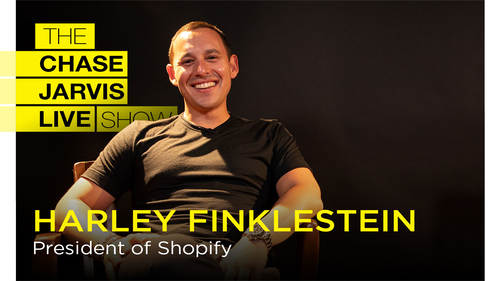 Hey, what's up with your friend Chase here at the Chase Jarvis live show on Creative Live. You know this show where I sat down with amazing humans and I do everything I can to unpack their brains with the goal of helping you live your dreams and your hobby in life. Our guest today is Harley Finkelstein. You probably know Harley's work. If you don't know his name, he is the president of Shopify and why would I have this guest on right now here, as we're emerging from a global pandemic. It's because now is the best time in the history of the world to start your own business on the internet. Uh the platform that they've built over there is incredible. But mostly I wanted Harley on the show today to talk to you about how you can take advantage of this particular moment in time to either start or advance that side, hustle the psychology around how we spend our money and time the opportunity to provide equity and opportunity for underserved communities is the greatest all time history of the...

It’s no secret that 2020 has shifted how we do business. Businesses, creators, artists and remote workers had to adapt and innovate in new and expanding ways, accelerating innovation, technology and the internet. Ordering take-out, banking, and even counseling online was no longer a nice-to-have, it was do or die.

One person on the front lines of that evolution is my good friend Harley Finkelstein, president of Shopify, where he is building, championing, and helping other businesses grow. Today, Shopify is one of the the world’s largest eCommerce platforms. Harley founded his first business at 17 years old, and developed a problem-solving skillset that has been instrumental throughout the last 11 years building Shopify. By disrupting the entrepreneurial space with services and features that were traditionally reserved for large corporations, Shopify is powerful tool for small businesses, artists and entrepreneurs alike.

In this episode we explore:

Harley Finkelstein&#160;is an entrepreneur, lawyer, and the Chief Operating Officer (COO) of&#160;Shopify. He founded his first company at age 17 while a student at McGill.
SEE INSTRUCTOR'S CLASSES