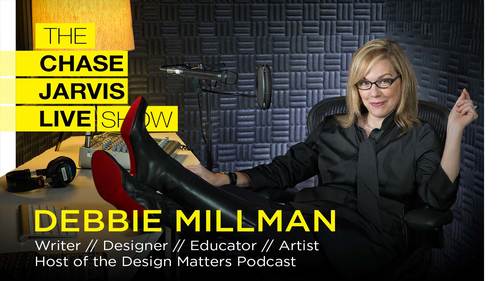 everybody What's up Chase, welcome to the episode of the show. The chase Jarvis live show here on Creative Live, you know the show where I sit down with incredible humans and I do everything I can to unpack their brains with the goal of helping you live your dreams in career, hobby and life. My guest today is a dear dear personal friend, she's been on the show before. She is the one and only Debbie Millman now. She describes herself as a writer, a designer educator, artist, brand consultant and host of the podcast Design Matters, one of the longest running podcasts of all time. It is absolutely incredible. I have been a guest there, I highly recommended uh we also talked today about a bunch of really important stuff. Of course she's got a new book out based largely on the podcast called Why Design Matters, but more importantly, we talk about a number of things, things like what it is that you truly love to do and why that is so important in your life. How do you spend more time doing w...

At a certain point in our careers, there are no more promotions to seek. No more pay raises to demand. No more competition to be had…. At the peak of our careers, a sense of achievement can be offset by the sheer terror of falling down to the bottom again.

For over thirty years, Debbie Millman established herself as a creative leader, on her own terms. Designer. Educator. Artist. Brand Consultant. Podcast Host. But unlike many others, Debbie did not just invent a brand.

She focused on building character, creating a great reputation, and ultimately mastering her craft.

The iconic host of one of the world’s longest-running podcasts, Design Matters, joins me in this episode to share the ups and downs of her incredible journey, the lessons learned, roles played, and her plans for the future.

If you don’t know yet, Debbie is also the author of six books, including two collections of interviews that have extended the ethos and editorial vision of Design Matters to the printed page: How to Think Like a Great Graphic Designer and Brand Thinking and Other Noble Pursuits. She has an upcoming book based majorly on her podcast Design Matters, called Why Design Matters.

Highlights of our conversation: