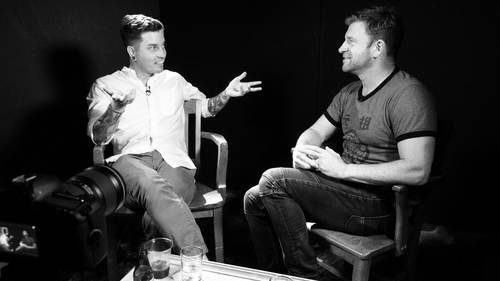 Hey, everybody, What's up? Chase Driver Syria, Good friend. Welcome. Another episode of the Chase Service Live show here on Creativelive. You show This is where I sit down with amazing humans And I do everything I can unpack their powerful brands with the goal of hoping you live your dreams in career in hobby and in life, my guest today is a multi New York Times best selling author is also built An amazing start raised more than $100 million. And as this democratizing access to space to physical space with a company called Breather. Lots of other things. Lots of other accolades. We could hang on this guy before we do. I need to introduce him. My man Julian Smith, back for second show. I love you. Hey, thanks for having me. Thanks, but two shows, then a couple of maybe three years. Maybe a long time ago. Ah, lot has changed. And that's one. The reasons I'm very excited having back. I'm gonna go back in time. I'm gonna take us back for a second, Okay? The way back machine has begun and I...

Julien is BAAACK…this time talking about both his best selling books (The Flinch, and Trust Agents) and…drumroll please… his latest startup venture called Breather – an amazing service the provides on-demand meeting and studio space all across North America, which has raised more than $100M to date. When I need recording studios for the podcast on short notice in LA or NYC? I use Breather. A quick headshot where you don’t want to rent a photo studio for $3000. Yep, Breather again. $150 bucks. You get the picture.

But more than anything, this episode is simply rich with a dose of reality that all of us creators and entrepreneurs need to hear: namely that we’re all in this together. That we all have imposter syndrome. That we all simultaneously love AND fear what we’re doing when we’re setting out to create something with our name on it. And that we’re all….human.

Julien Smith is a long-time friend and familiar face on the podcast. I first brought him on in 2013 to talk about why not caring about what others think is a useful skill to have as a creator in any field (translation: he penned a LEGENDARY blog post called ‘the subtle art of not giving a f*$k’ – which went crazy viral and later inspired a best selling book by Mark Manson…).