Guitar gods of the late ‘60s like Eric Clapton and Jeff Beck worshipped at the altar of blues and roots music. Naturally, legions of aspiring musicians started working their way through the discographies of blues greats like Freddie King and John Lee Hooker. Speed wasn’t really a factor yet during that era. It was more about feel and vibrato than anything else.

It wasn’t till the mid to late ‘70s when game-changing guitarists like Uli Jon Roth and Eddie Van Halen first appeared on the music scene that people truly started taking note of a player’s fretboard velocity.
At the start of the ‘80s, a Californian musician named Mike Varney launched Shrapnel Records, an indie label focused on signing bands, or solo artists, that specialized in what many folks were referring to as “shred guitar.” Shrapnel Records would go on to become to the shred guitar movement what Def Jam was to hip-hop.

With Varney’s roster at the forefront of the movement, the ‘80s were the golden years for shred. By the early ‘90s, guitarists started to scale back on the speed approach, turning back to the more blues-based influences of the late ‘60s and early ‘70s. In the last few years, shred-heavy bands like DragonForce and Periphery have inspired a new wave of speed-crazed guitarists.
With so many new players embracing the style again, we thought it was about time we took a look at the five finest shred guitar albums of the ‘80s as a tribute to the architects of the sound.

Jason Becker’s musical career has been one of saddest yet most inspiring journeys you’ll ever hear. One of the brightest talents on Varney’s roster, the Northern Californian guitarist was diagnosed with Lou Gehrig’s Disease at the age of 20. The grim prognosis came soon after landing the gig of a lifetime replacing Steve Vai in David Lee Roth’s solo band.
Recorded and released a few years before his health deteriorated, while he was still a teenager, Perpetual Burn stands as one of the finest albums of the shred era. While its eight tracks prominently displayed Becker’s speed and dexterity, the dreamlike arrangement on “Air” proved the kid was way more than a one-trick-pony.

A couple of years before Perpetual Burn, Becker and fellow shred phenom Marty Friedman joined forces in the band Cacophony. The group’s debut album, Speed Metal Symphony, features some of the most over-the-top, overblown lead guitar work of the ‘80s.
The most impressive aspect of the record is how well the two virtuosos bob and weave through each other’s fretwork. For every new student who enrolled at the Guitar Institute of Technology from 1987 – 1989, Becker and Friedman should have received some kind of kickback. That’s how influential Speed Metal Symphony was in its day.

Currently holding down guitar duties in UFO, Vinnie Moore first made his mark on the shred scene with his debut 1986 debut full-length, Mind’s Eye. The album found the Delaware native bringing in keyboardist Tony MacAlpine, drummer Tommy Aldrige (Whitesnake, Ozzy Osbourne), and Andy West (Dixie Dregs) to round out his labyrinthine arrangements.
Predominantly known for his blazing guitar skills, MacAlpine’s crystalline keyboard lines on Mind’s Eye set the perfect bed for Moore to work his magic over on such songs as “Daydream” and “Hero Without Honor.” Most of the rest of the album finds Moore ripping shred solos with a fluidity that still amazes, even decades after Mind’s Eye first hit stores.

1986 was a busy year for Tony MacAlpine. Not only did he lend his keyboard talents to the aforementioned Mind’s Eye album, he also handled guitar and keys in M.A.R.S., a group that also featured Tommy Aldridge, Rob Rock, and Rudy Sarzo (Quiet Riot, Ozzy Osbourne), releasing an album called Project Driver that year.
If that weren’t already enough, MacAlpine also found time to record one of the most important albums of the shred era: Edge of Insanity. The 11-track affair is a complete showoff party for the classically trained musician. Not only does he bring the shred on the six-string, he also conducts a keyboard clinic, flying up and down the keys with reckless abandon. As striking as MacAlpine’s speed skills are on Edge of Insanity, it’s the way that he manages to keep the songs so memorable throughout all of the instrumental pyrotechnics that makes the album so irresistible.

The shred guitar revolution of the ‘80s began with Sweden’s Yngwie Malmsteen’s debut solo album, Rising Force. Further proving his importance to the shred movement, Mike Varney was the first person in the music industry to give Malmsteen a shot, bringing him to the U.S. when he was still a teenager. Hard rock aficionados first became familiar with the Swede from his stints in the bands Steeler and Alcatrazz, but it was Rising Force that turned the then 21-year-old into one of the world’s most emulated guitarists.

The album features powerhouse vocals from future Journey frontman Jeff Scott Soto, but at the end of the day, Rising Force is all about Malmsteen. Like his childhood hero, Ritchie Blackmore, Malmsteen has always looked to such composers as Paganini and Liszt for inspiration, and that sensibility guides the majority of his work on Rising Force. Malmsteen’s solos on tracks like “Black Star” and “Now Your Ships Are Burned” helped to introduce the neoclassical style of shred to millions of would-be guitar heroes. 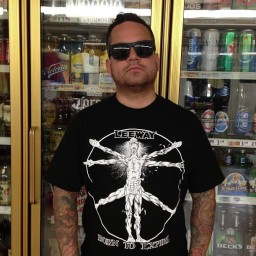 Co-owner of NoEcho.net, Carlos Ramirez is a former editor at AOL. He resides in Los Angeles with his wife and daughter, and works on the marketing team at Fuse, the cable TV network. Twitter: @musicquizking

No guitar/bass pedal is going to make you a better musician. But they sure are a lot of fun. And…