The Creative Economy Rewards the Quick & Dirty — Not the Perfect “Talent is not stopping.”

For any 20-something or creative professional wishing to develop in a new direction, Kirby Ferguson’s words are one part inspiration, one part relief, and another part assignment. Your ability to do something, or create something, is less about your innate “genius” and more about diving into the work and being persistent.

Kirby, the independent filmmaker behind Everything is a Remix and the upcoming This Is Not A Conspiracy Theory, spent a decade releasing his online videos as a hobby before quitting his job to pursue film full-time. He has oodles of Real Talk for those who wistfully gaze at the guitar or dream of getting behind the camera one day: just start creating… and do it alot.

For creative newbies, Kirby suggests kicking perfectionism to the curb. If you’re working on a new song or testing out your design chops, get your hands dirty quickly, throw your work up for the world to see, and improve/iterate after the feedback comes in. After all, the internet allows creative professionals to run hundreds or thousands of mini experiments to see how their work is received; artists can then compare those results to their original objectives and tweak accordingly. Do the people love it? Hate it? Misunderstand it? Are they supposed to? Do they just want more cowbell?

“Most of the time, you’re working on your voice. It’s just your own journey. You’re just working on your stuff and trying to get better, putting it out there and getting a response from it,” says Kirby, “Getting a feel for an audience is important, and the internet is a great place to try and fail. Because if you fail, nobody really sees it, nobody cares. No harm, no foul.”

In the new creative economy, fueled by self-produced, self-published work, and spread through social networks online, the smartest independent creatives aren’t sitting alone, painstakingly polishing a perfect piece. No, they’re the ones releasing their work early and often, building a community of followers and supporters who provide feedback, connections, and clout for future opportunities. The failures get ignored in the noise of the web, while successes snowball — provided your fails aren’t epic ones that go viral.

Agreeing with the proverbial, “perfect is the enemy of good,” Kirby saves the fine-tuning for when a piece is popular enough to warrant a new release — if a short self-published video has traction and interest, he’ll work on its sparkle for the big screen. Otherwise, keep pumping out new work, and cash in on the benefits of having direct access to your audience.

“The interactive method is more approachable. When I think something has to be perfect, I’ll just fiddle with it forever,” says Kirby, “The truth is, for releasing stuff on the net, I don’t think it matters if it’s perfect.” For Kirby, it’s more important to keep feeding great (though imperfect) things to your audience on a reasonable schedule than to go down the rabbit hole of perfectionism.

For those just starting, the key is to just do it, and be okay with a product that looks rough around the edges.

“It’s okay to be primitive,” he says, “That’s a perfectly fine way to start making things.” The easiest way to do this is to start copying the stuff you like, fiddling with it, adding your own content or style, and building from there.

Kirby has a few messages for people embarking on creative skills, messages he wishes someone had ingrained in him when he was young.

“I wish the earlier me understood work and practice more. Just the repeated, concerted effort to get better at things. I wish I didn’t have the notions of talent and genius I had back then,” he says.

There’s no such thing as not having enough talent to create something. According to Kirby, persistence is what creates talent — just stick with it and improve as you go along. 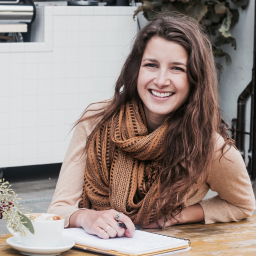 DIY or Buy? How To Choose The Perfect Wedding Backdrop

The wedding backdrop is trending to more and more elaborate designs as couples compete for the most creative, gorgeous draperies…

The advent of Etsy and other online marketplaces has raised an important question among crafters: With hundreds of thousands of…

Did You Get a Sewing Machine for Christmas? We’ve Got Some Helpful Sewing Tips for Beginners

Got a sewing machine for Christmas? How exciting! There are few more things more thrilling than the promise of a new…

Learn How to Make Your Own Perfect Printables