The iPhone, despite being a phone at heart, is, of course, so much more. Chiefly, it’s one of the most popular, widely-used cameras in the world — though some of the different settings and tools are still a little vexing to the average iPhoneographer.

Burst mode, for example, which is a camera setting that allows the user to capture 10 frames per second, may seem like a strange pick for a mobile phone photographer — why do you need 10 of the same picture, especially if you’re worried about storage space? But, says author and photography educator Jack Davis, this particular setting can be extremely helpful when you’re capturing something that’s on the move, just like you would with a regular camera.

This is, of course, a commonly-used setting on non-phone cameras, especially by photographers who are shooting something active, like a sporting event or a wedding. For mobile, it’s just as helpful, because it can ensure that you grab the moment you’ve meant to catch at its absolute best. But, unlike in a regular DSLR, where you might just keep all of the frames and sort through them later, iOS makes it easy to pick the best one at the moment you’re shooting it, which makes it easier to upload and, say, share to Instagram.

Plus, burst mode in iOS does something else: It helps you select the best frame of the bunch.

“When you’re shooting in burst mode, the thing to remember that’s very cool,” Jack explains, “is that, in your albums, you can see…at the very bottom, it has a little dot at the bottom of my images. That dot is showing me the sharpest images.”

That way, you can shoot as many frames as you want — just hold down the button and they’ll fire away in rapid succession — and immediately go back through and find the clearest one, even in low light or when you yourself are in motion.

Another great use for burst mode? Asking someone else to take your photo.

“Now the person who’s taking the picture automatically gets 10 shots,” says Jack, “and now, you can say, ‘just save that one.'”

Rather than asking a stranger to take several shots, put your camera in burst mode and ask them to just hold down. That way, when you’re deciding which to keep, you have a lot more — and it’s much less inconvenient for the photographer. Or, if you’re trying to take a selfie, burst mode can limit the amount of time you spend posing and reposing. You can also add a timer to burst mode, which gives you three seconds to prepare for the multi-frame shot. 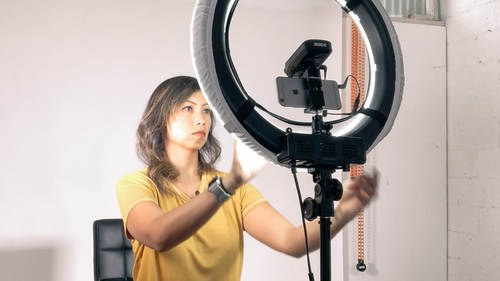 Does Size Matter? Why Your Camera May Change the Way You Shoot

There seems to be a common trend amongst creatives: The need to have the newest, biggest, and best gear items…

3 Reasons Photographers Should Be Excited for the New iPhone

CreativeLive CEO Chase Jarvis is always telling us that “the best camera is the one that’s with you," — and…