How to Find the Perfect Location for Digital Sports Photography Location scouting is incredibly important for any photo shoot, particularly a lighting shoot. Not only are you inspecting the space for its ambient light and pedestrian and vehicle traffic, but even more importantly you are looking for something that inspires you and conveys the story you want your image to tell.

I start every shoot by walking around the space and try to see it from as many angles as possible in the hopes that something will catch my eye and make me think of a way to make an exciting image.

Join Red Bull Photographer Dustin Snipes, as he takes you on a journey through the creative process behind photographing 3 sports at 5 locations with 5 athletes. Watch now.

The I90 bike path tunnel in Seattle, Washington looks very cool as you approach it. It reminds me of those tunnels you would see on old Saturday morning cartoons, the kind that Wile E. Coyote would try to trick the Road Runner into running straight into. The moment I walked into the 1600 foot tunnel I was drawn to the lines created by the ambient lighting above. As I walked down the long straight path I noticed the lights were glowing with a green and other warmer red tone. I love mixing light and color temperatures so my mind went directly to  creating a shot that incorporated the long lines and ambient glow from the lights.

The next question I asked myself was, what tone I wanted for this image. What did this type of image feel like? I had red colors, so why not make them redder? I bumped my ISO up to 9,000 kelvin. Once I did that, I had an image that was warm and reddish, almost surreal looking. I decided to push the surrealistic quality even further by slowing down the shutter to exaggerate the lines the lights had already created. But now, with a slow shutter, I would need to move at the same pace as the rider or would have to do a pan. I recently did some work for an electric scooter company and thought that it would be the perfect tool in order to get the shot I needed. I could have used a rigged up longboard skateboard but figured for repetition and speed, something that was powered would be easier. So during the shoot, I had my amazing assistant Caleb Adams drive the scooter while I sat on the back on the trailer while my other assistant held a Broncolor Siros light (8 out of 10 power)  as I took slow shutter shots at different speeds until I got the look I wanted.

Every shoot is different and every location has its pluses and minuses. Don’t always try to fix the negatives, sometimes double down on them and you might just like the outcome.

Join Red Bull Photographer Dustin Snipes, as he takes you on a journey through the creative process behind photographing 3 sports at 5 locations with 5 athletes. Watch now. 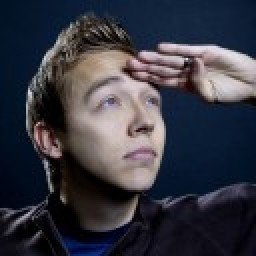 The Sochi Winter Olympics have been absolutely stellar (aside from the poisonous water / feral dogs), and every moment of…

The more people in a photograph, the more complicated the shot — which means that sports team photography is, well,…