The beginning of this week marked the end of our Photo Week 2015 Grand Prize Submission contest, and wow did we have some amazing shots from CreativeLive fans around the world. The photographer with the most votes won a free trip to Seattle, and will be participating live during this year’s Photo Week with all of our talented instructors.

Although the grand prize trip has now been given away, there are still plenty more Photo Week goodies to be won! Enter your photo in the Photo Week Road Trip Giveaway today, where we’ll be giving away one free CreativeLive class to a new winner every day. The sooner you enter, the more likely it is to win!

Today, we’re highlighting the top 10 finishers with the most votes in this year’s Photo Week 2015 Grand Prize Submission contest. We interviewed each photographer, in order to get some back story on their images, uncover what motivates them to pursue photography, and learn what inspires their creativity.

From Andrew: “This portrait of Alison Bruley was taken at an old abandoned warehouse in Dallas, TX. She wanted senior portraits that had a lot of color and showed the urban side of her city. The location was perfect, because artists can legally tag here – so every time you go back the colors and graffiti designs all over the walls are different.”

Andrew has enjoyed photography his entire life, and has been shooting full-time for 3 years now. He’s primarily self-taught, but has attended a few informal classes over the years. Quite impressive for the portfolio he’s built for himself.

You can find more of Andrew’s stunning portraits on Instagram (where he has 19k+ followers) and on Facebook. From Angela: “This image is of Erin, one of my friends’ daughters currently serving in the National Guard. It was shot in my studio using a two strobe setup. I was shooting with the theme “Land of the Free” in mind and asked her if she was up to doing a session for me.”

This session turned out better than she could’ve ever hoped for. To inspire and push herself in her own creativity, Angela is part of a group of photographers in her city that have monthly challenges, and also finds that she frequently uses Pinterest as an inspiration for her works. From Alessandro: “This beautiful image was shot in Ocean Park, San Juan, Puerto Rico. This shot was captured during the festivities celebrating the boy’s 1st birthday in the backyard of the family’s home. It is a seemingly mundane scene showing a multitasking mother trying to balance looking after an energetic child, while simultaneously attending to her guests. I felt like it was such a classic moment of early motherhood. I love capturing these transient moments that actually turn out to be very special in our lives. These are the captures that folks tend to appreciate more because they are spontaneous.”

“The spontaneous moments we capture in photographs, turn out to be most special.” @apgoriginal

For the past 3 years, Alessandro has always had a camera with him and loves capturing spontaneous moments with natural light. As a producer and storyteller he often looks to his surroundings for creative inspiration, and follows painters, cinematographers, filmmakers, writers and photographers that can take him into his own world to inspire self-reflection. From Elbie: “This image was shot in Lawrenceville, Georgia’s historic downtown square. It’s the city we’ve called home for the last 16 years! While I was waiting for the perfect moment to shoot this church as a silhouette, the sun continued to set and I took the opportunity to grab some sun flare action.”

Elbie pulls creative inspiration primarily from nature and other people. “It’s great to see the faces of people I shoot after they see their images! I see the image completed (in my mind) before I take the shot. I feel like I know what the end result will look like..” shares Elbie. From Michelle: “This was shot in the San Juan Islands of Washington State. Lopez Specifically. My mom lives there. I live in College Station Texas, but was up to visit a few weeks ago and I wanted to try something new… It was my first time shooting stars and I went out with a friend and mentor who has a photography passion.”

“Barns, stars, friendship, Washington State, cool nights and photography.. doesn’t get much better..” Michelle shares. She had never seen the Milky Way before, and it was also her first time shooting stars in photos.

This one is my personal favorite! Here’s Collin: “This photo of Milo was taken as he was walking around wanting to share his watermelon. I knew I could catch him in a moment where he was being a total boss, so when he walked up to me, I tried to give him some “nom nom nom” sounds with my face gritting my teeth behind it and he just went for it.”

Collin and his wife photograph events, weddings, and youth in Flagstaff, Arizona. Only recently have they gotten into youth photography, but clearly they have quite a talent for it. In fact, focusing on more youth photography has given them quite an upswing in their photography business. From Tatenda: “This was shot in Zimbabwe along the Zambezi River near Victoria falls. When I shot this photograph, everyone seemed to love what they were seeing ahead of them. Because there was this beautiful reddish color in the opposite direction of the sunset, I instead decided to shoot with the sun toward my subject and capture the boat. The boat became the queen and the story of my image that day, as everyone in the boat was fascinated by the sunset. For me it was the opposite.”

Tatenda is inspired by his passion for photography and seeks to bring positive change to Africa & the world through sharing transformative images. From Levi: “This picture was shot on Lombard Street in San Francisco. It was early enough in the morning that day to beat most of the masses to the street to have a unique shoot of the iconic landmark. I really enjoy looking for a unique view of common places and things. I like to find the special, in the midst of the mundane that most people would overlook.”

“I like to find the special, in the midst of the mundane that most people overlook.” @TheLeviMcKay From Karyn: “This was shot just outside of High River, Alberta on the farm where I board my horse, Dahlia (who I always joking call the bearded lady). While she has a generally upbeat and outgoing personality, she always looks so forlorn. This was simply an attempt to document her interesting personality.”

Karyn is inspired by everyday life in her photography. She strives to take the people and things she has near her, and constantly show them in new and interesting ways. She works as a commercial photographer and uses her every day life as a creative outlet. From Tom: “This image is a composite of multiple photos. My dad received a rather strange gift of a box of home-grown mushrooms, and I had just returned from seeing Alice in Wonderland.. then I got the idea to use a flashlight to do some light painting, shoot my ‘Alice’ and add the lantern head at the epicenter of where the light appears to be coming from.”

Tom is a young french photographer who recently moved to Montréal, where he’s pursuing photography studies at Dawson College to hone his skills before jumping into the world of professional photography. This image in particular turned out so well for him. He realized how happy he was once people asked how it could have possibly been shot.

Don’t forget to enter our Photo Week 2015 Road Trip Giveaway and be one of multiple winners who will get a free CreativeLive class of their choice. It kicks off today!

Join us for Photo Week 2015, the biggest photo education event of the year featuring Sue Bryce, Jasmine Star, Matt Kloskowski, and many more. 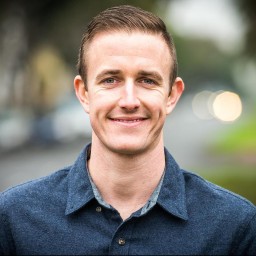