Most people are neither comfortable nor particularly experienced in front of the camera. Which means that, in order to take the very best photo of your subject, you, as a photographer, need to be able to give the kind of direction that makes sense and churns out consistently beautiful results.

After years of portrait photography — wherein her sole motivation is to make women look and feel their very best — master photographer Sue Bryce has devised several fool-proof instructions and methods of posing that not only delight her clients, but almost always sell her products for her.

This one trick, which she calls “the faux-waist,” is a concept that every portrait photographer should adopt immediately.

The idea, says Sue, is to create the illusion of a narrow waist in clients. However, when you instruct a subject to encircle her waist, she’ll likely actually put her hands much lower.

To create the illusion — and, in doing so, create the best pose — Sue instructs them instead to bring their hands higher and in toward the center of their abdomens.

“It’s not your real waist,” says Sue, but many subjects think that’s where their hands should be. As a photographer, it’s up to you to instruct them how to pose in such a way that the illusion of a very narrow waist is there.

Do note, though, that when given this instruction, many women will also roll their shoulders forward.

“To correct this…I’m going to just say, ‘drop your shoulders and relax them. And push your elbows back.’ And as soon as her elbows go back from her body, she’s no longer rolling her shoulders.”

“That covergirl shot sells to pretty much every single client that I ever photograph,” she says. 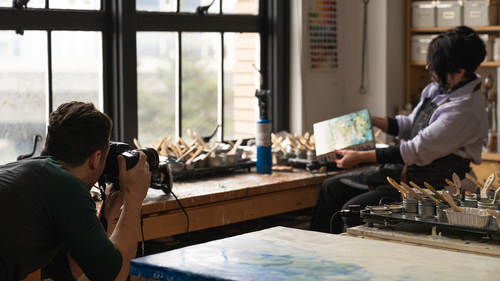 If you've ever had a hard time figuring out the best way to photograph a man, don't despair. "It's really…

Sue Bryce: I Am What I Am Because Of The Lessons I Learned

https://instagram.com/p/zVJmBqGBSv/?taken-by=suebryce Learning is a lifelong pursuit. Regardless of your skill level, your formal education, or how many years you've been…