Lesson 12 from: Become an Engaging Presenter 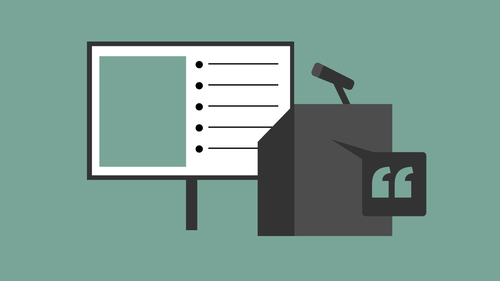 Lesson 12 from: Become an Engaging Presenter

Engage Your Audience Right Away

Why Presentations Miss the Mark

What happens when you start to execute and all of the sudden all the anxiety comes up? And we see that all the time. I feel fine, it's going to be great, I'll wing it and then you get onstage and you get really nervous. And all your thoughts are about, this isn't working. I don't know. So you have to think about how you're going to actually work on that anxiety. So if you have ritual, you're already starting to build in ways, to build out that anxiety. It's normal. It's great. If you're anxious, a little bit. It means, it matters to you. So welcome that anxiety and be comfortable with it and say this is my anxiety. What do I do with it? That's why warm up exercises are so important. So you're warming up your mind, you're warming up your body, and you're warming up your voice. These are all the things that are important. Well, here is how your mind works, or your brain works. We get into fighter flight mode and all of the sudden, adrenaline is pumping through our body. All of these thin...

This is my second time as an audience member for Creative Live, and I have to tell you all - I'm hooked! I decided to give it a shot because I'm genuinely interested in the subject being covered, it is a wonderful networking opportunity, and its free for audience members - so I receive the course and the bonus materials. For those of you that are nervous about the cameras like I was, let me assure you that you hardly even notice them. If you ever watched a few courses before becoming an audience member, you can tell how little the audience is even shown. Now as for Mr. Whelan - CL couldn't have picked a better presenter to present about presentations. His knowledge and experience reflects in his presentation - he's warm, personable, and if he did rehearse and prepare the way he recommends, it's not noticeable. He's natural and you can relate to every point made. I hope there are other Andrew Whelan courses in the future. I highly recommend CL - as a participant and an audience member - for their variety of course content and bonus materials that I continue to use in my day-to-day. I strongly recommend any class or workshop that includes Andrew Whelan. His advice, experience, and genuine empathetic approach to helping others become better, is invaluable. Thank you Andrew and Thank you Creative Live!

Thank you! You gave me some fresh ideas to share when I am presenting, and when I'm helping folks be more comfortable when they need to speak in front of others. Good examples, to the point without fluff, and even a bit entertaining. Thanks!

This was my first live audience experience, and wow was i shocked how engaged i was! Im someone who has an awful attention span so the fact that i was listening and taking everything in was fantastic. Thanks Andrew for some great tips and making me laugh and thanks to Creative Live for having me in the audience. If anyone who interacts with other people on a regular basis this class is essential!