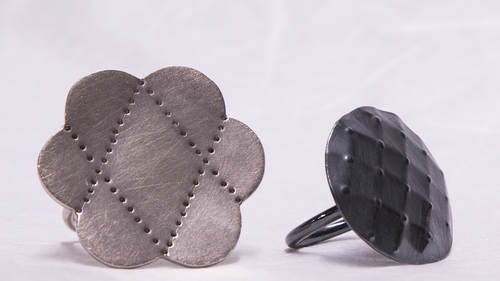 So then I'm coming over and I'm gonna work on wood for this if you work on steel, you get a different thing that happens and you can play around with that but this actually goes from flat to curving a little bit from this stamping, which is something that I chose to keep and like and work into my design instead of keeping it fly if you work on the steal, your peace will not buckle because if this is actually pushing into the what a little bit so it's moving the medal in a different way you'll get a more of a texture, a different texture than if you work on this deal. So we're gonna work on a soft piece of wood here today to get the patterns and what I'm going to use is a center punch. This is the centre punch we typically use it to make a little spot where we're going to drill into the mark in the metal somebody's a center punch and then I'm going to use this stamp that's like a got a linear shape to it can get little set of stamps that come with different patterns on them and they can...

Stamping is a great way to customize metal jewelry and add unique flair to the pieces you create. In Beginning Stamping for Jewelry Making, Raïssa Bump will show you how to add personal touches to your handmade jewelry through basic stamping techniques.

Raïssa has made jewelry for most of her life. In this class she’ll share her passion for metalwork while showing you how to make a ring with a stamped “quilted” design. You’ll learn how to:

You’ll learn the stamping process, from start to finish, and develop the basic skills you need to explore more stamping options.

I don't even make jewelry and I enjoyed this class so much. There is something relaxing about watching Raissa make jewelry. She explains everything very clearly!