Lesson 2 from: Behind the Podcast : Danielle LaPorte on Unmistakable Creative 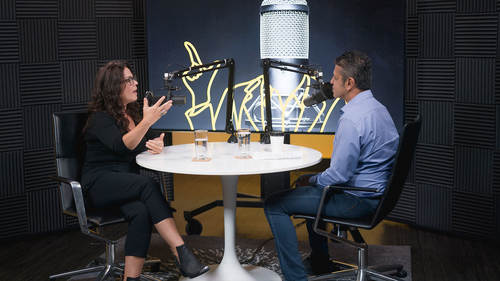 Lesson 2 from: Behind the Podcast : Danielle LaPorte on Unmistakable Creative

About the Unmistakable Creative Podcast

Would you help me welcome Danielle out here? (congregation cheers and applauds) Cheers. Hi. Hello, my friend. Hey, Danielle. How's it going? Good. Welcome back to the Unmistakable Creative for the fifth time. Number five. Am I like a record-holder? You are the record-holder. Oh, I love it. I never win stuff. You're not only the only guest to have appeared five times, but you are probably the single-handed largest referrer of new listeners to Unmistakable Creative. That's 'cause you give great interviews, yeah. Thank you. Well, you are a fantastic guest, so that makes it easy. I wanted to start with something that I haven't asked you before. What did your parents do for a living, and what impact did that end up having on the choices that you've made with your life and your career? My parents for a living, various things. My mother, I mean, one of my first memories of being out in the world is my mother taking me with her to college. So, my parents got knocked up in...

Danielle LaPorte is an invited member of Oprah&#8217;s Super Soul 100, a group who, in Oprah Winfrey&#8217;s words, &#8220;is uniquely connecting the world together with a spiritual energy that matters.&#8221;
SEE INSTRUCTOR'S CLASSES