Behind the Podcast : Jason Nemer on The Tim Ferriss Show

Behind the Scenes of The Tim Ferriss Show: Acroyoga 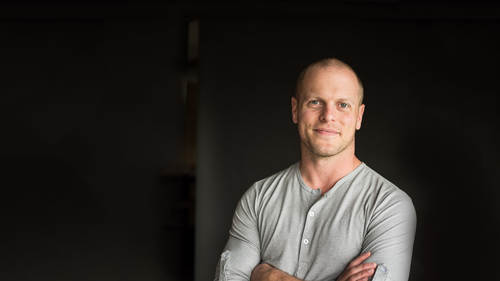 Behind the Podcast : Jason Nemer on The Tim Ferriss Show

1. Behind the Scenes of The Tim Ferriss Show: Acroyoga Show Transcript

Class Trailer
1 Behind the Scenes of The Tim Ferriss Show: Acroyoga 1:46:53

Behind the Scenes of The Tim Ferriss Show: Acroyoga

Jason. Welcome to the show. Thank you. What are we drinking here? What a great enjoyed the label. I enjoyed the label so much I have to share it with the world. It's Ah, duck Shit! Wu Long tea duck Shit Will long t It's true. What is the story behind the duck shit portion of that? Well, back in the day I hear in a region in China there was this amazing tea and it was so good that they had to play it down. So they called induction tea, and it was played down for however many centuries until it's been discovered. Isn't excellent. Tea is not that I got to say I'm enjoying the duck shit fragrance, long tea, and, uh, it is almost his odd sounding as our first encounter. And I remember the dinner at which we met. And this was in L. A probably Venice. Maybe Santa Monica, Santa Monica. And it was that whose home was audience. Dean's home. Dean and I was with my buddy Travis Borer, the ninja, the ninja, who is very much worth checking out for those people who have not seen him in action. Americ...

Watch behind the scenes footage of The Tim Ferriss Show podcast! Tim Ferriss joins Jason Nemer, co-founder of AcroYoga, to show some poses and to talk about health, meditation, acrobatics, yoga, and the importance of discovery.Tim Ferriss’s podcast is the #1 business podcast on all of iTunes, and it’s been ranked #1 (of all podcasts) on many occasions. It was also selected as iTunes’ “Best of 2014” and “Best of 2015.” Jason Nemer is a co-founder of AcroYoga, which blends the spiritual wisdom of yoga, the loving kindness of Thai massage and the dynamic power of acrobatics.

Tim Ferriss has been listed as one of Fast Company’s “Most Innovative Business People”, Forbes Magazine’s “Names You Need to Know,” and is the 7th “most powerful” personality on Newsweek’s Digital 100 Power Index. He is an early-stage tech investor/advisor (Uber, Facebook, Twitter, Shopify, Duolingo, and 20+ more) and author of three #1 New York Times and Wall Street Journal bestsellers: The 4-Hour Workweek, The 4-Hour Body, and The 4-Hour Chef. His podcast — focused on deconstructing world-class performers — is the #1 business podcast on iTunes and was selected as 'Best of 2015' by Apple.
SEE INSTRUCTOR'S CLASSES

Jason Nemer is a co-founder of AcroYoga, which blends the spiritual wisdom of yoga, the loving kindness of Thai massage, and the dynamic power of acrobatics. Jason pursued acrobatics intensively during his teenage years, becoming a two-time US Junior National champion in partner acrobatics and representing the US at the World Championships in Beijing in 1991.  He performed acrobatics in the opening ceremonies of the 1996 Olympics.
SEE INSTRUCTOR'S CLASSES

Thanks to Creative Live for carrying this video podcast with phenom Tim Ferriss expounding on Acro Yoga for those interested but uninitiated. Jason is a great advocate of his discipline and lifestyle which strikes a deep chord within me harking back to my forelorn vagabond days. We will discuss this at my next yoga class.

Once again Tim turns me on to something I was resistant to...Thanks again and again for this and...Ketogenic Diet, Wim Hof, GST, etc....