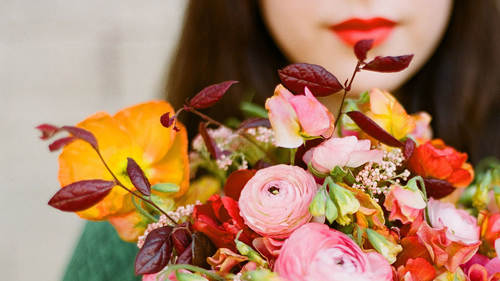 We're going to have one of our lovely students up here today. Um would you like to join us? Sure. Come on up. So I kind of want you to just do start making a bouquet and then if you have questions or I'll give you some guidance on what I think would look good maybe you can just do exactly what I started doing he's with their case who's in the mirror. Okay, maybe we can kind of talk it through you think about what we're gonna do, what you want your first your center to be. What do you want your central flower to be? Kind of a focal. Yeah, so thinking sort of like you did before maybe one of the puppies at the end or so then keep your party save until the end or at least halfway through okay, what? What? I was what I what I start with usually is something green, but and something that you want to show in the middle of your centerpiece of your book a somethingto highlight. Okay. That's, right? And then they wanted to big no that's. Fine. Then if you want tio yeah surrounded with something...