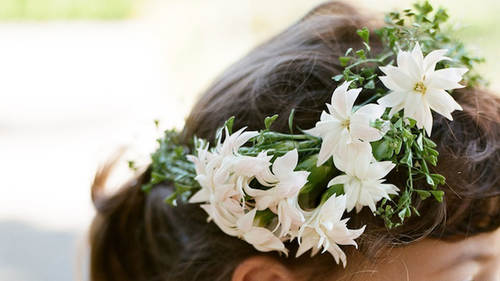 I'm going to use these lovely carnations that I brought you have carnations can we take apart our basket um sure or I can give you some too here I won't be needing to many of them so are all the crowns now structurally sound from all of our students want to make sure that foundation is good get in there yeah yeah yeah I can come around and help you guys out you need a little that looks good like that and you did a great job taming those lead pretty yeah that looks to hide that you will with flowers oh, great yeah, great yeah I'm on the flower tape do you always attach it to the plant material or do you attach it to itself and then start wrapping around to itself because that's when it's more sticky to itself checking yourself out in the bucket I saw that look so do you have all have explosion left a little bit? Okay let's see let's fix that because are we don't have that many leaves at least I don't have that many left on mine I'm going to use a little bit of explosion grass to kind of...

What could be sweeter than a wreath of blooms on a flower girl’s head? In Flower Girl Baskets & Crowns, Kiana Underwood will teach you everything you need to know about floral design for the wedding party’s tiniest member.

Kiana will show you how easy it can be to use fresh flowers to create beautiful crowns. She’ll also guide you through the process of constructing gorgeous, unique flower girl baskets.

In this fun and beginner-friendly class, you’ll learn how to create flower girl’s baskets and accessories that are lush, unique, and beautiful.