GRAPHIC DESIGN FOR YOUR BUSINESS: A CONVERSATION WITH GUY KAWASAKI & HUFFINGTONPOST 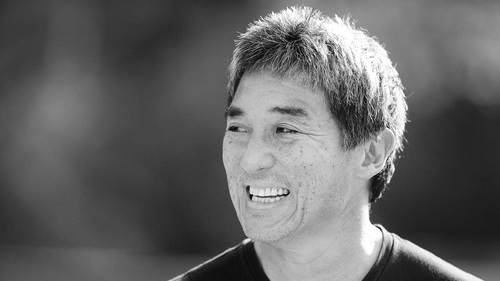 1. GRAPHIC DESIGN FOR YOUR BUSINESS: A CONVERSATION WITH GUY KAWASAKI & HUFFINGTONPOST Show Transcript

Class Trailer
1 GRAPHIC DESIGN FOR YOUR BUSINESS: A CONVERSATION WITH GUY KAWASAKI & HUFFINGTONPOST 25:00

GRAPHIC DESIGN FOR YOUR BUSINESS: A CONVERSATION WITH GUY KAWASAKI & HUFFINGTONPOST

Welcome to creative live I'm ca murphy I'm the head of the money in life channel here and today we have a very special guest guy kawasaki uh if you don't have a guy is hey is the chief evangelist for campbell which will be talking about today he also is achieve evangelists for apple back in the day no small deal he's also written numerous books I think I read thirteen through last count ah he's also the brand ambassador for mercedes benz is pretty cool that is very cool. So a pretty impressive background eso today he's here to talk about camba which is a design tool that we were just saying democratizes designed for people. And I was also reading that anything that you touch his gold no it's not what I said at all okay, so I call it guys golden touch ok, maybe that's what guys? Golden touch is not what you just said, which is everything I touch turns to gold I wish that was true guys golden touch is whatever is gold guy touches ah, the big difference is the victor and the context in wh...

Strong graphics are essential for building any brand. In the Internet age, the expansion of market access has driven the need for powerful, evocative graphic design tools that make brand stories stand out. Enter Canva. In 3 years, this online design tool has grown to serve over 6 million users, launched a design school, and transformed the ease with which design beginners create professional-grade graphics.

Guy Kawasaki, Chief Evangelist for Canva, and Candy Bigwood, Mobile Art Director at the Huffington Post, joined Kimberly Murphy of CreativeLive for a chat about the potential of design to elevate brand stories.
To become familiar with Canva’s powerful toolset, check out Easy Graphic Design for your Business with Canva, where you’ll learn how to:

Guy Kawasaki is the chief evangelist of Canva, an online graphic design tool. He is on the board of trustees of the Wikimedia Foundation, a brand ambassador for Mercedes Benz USA, and an executive fellow of the Haas School of Business (UC Berkeley). He was also the chief evangelist of Apple. He is also the author of The Art of the Start 2.0, The Art of Social Media, Enchantment, and nine other books. Kawasaki has a BA from Stanford University and an MBA from UCLA as well as an honorary doctorate from Babson College.
SEE INSTRUCTOR'S CLASSES

Enjoyed this conversation as I have been using Canva for a year or more now and love it. As Guy said, we don't all have the money to pay graphic designers rates and sometimes it's not having the time to wait for work to be done. Learning to use Canva was quite easy and It's definitely one of the best tools I have for my business. I pay for the Canva for Work but the free option is perfectly sufficient. I upload all my own images so it rarely costs me anything for a Canva image. Democratisation at it's best. Tracey Hurst - The Online Course Club

That's awesome, it's really inspiring... Thanks.

Just watched the class and checked out the Canva website. Seems amazing . I'm going to have a go.