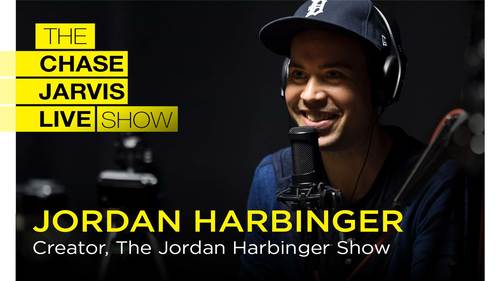 Mhm. Yeah. Oh well. Hey hey hey everybody, what's up? Good morning your friend Chase, Welcome to another episode of the Chase drivers live show here on Creative Live. You know the show where I sit down with amazing humans and do everything I can to unpack there brains with the goal of helping you live your dreams in career hobby in life. My guest today, you know who he is because you click the R. S. V. P. Button to be here or you're on either his channel or my channel. Uh I can't I mean it's been too long. My man Jordan, welcome back to the show. It's been way too long. There is good and purple with I mean come on man, nice to see your happy face again. Welcome to the you know it's funny I used to have a background like everyone else where I was like let me get some books up there and then I had a Mac book but then I want I thought you know what would chase Jarvis do? He wouldn't have some sloppy ass background with like a staircase and some chairs and like gym stuff on the floor. I'm ...

What does it take to create success and fulfillment in the long-run? Today’s guest is former Wall Street lawyer turned podcast host, social dynamics expert and multi-faceted entrepreneur, Jordan Harbinger. We dig into what it takes to push the limits for what is possible in your life.

Who are the 15 people you would call if you got laid off today? By digging the ditches and building relationships before you need them (check out his 6-minute networking course) you can maintain and reignite dormant connections to create what is essentially an insurance policy for your career.

Other highlights from the episode:

Enjoy … and if you haven’t already, be sure to check out his podcast The Jordan Harbinger Show anywhere you listen to podcasts.