Last year, commercial photographer Shayne Gray had one very big day — he quit his day job as a director and applied to be in the audience for Joey L’s portraiture class. Since then, he’s been working full-time for himself, and has collaborated with numerous talented directors, photographers, and models.

Before he quit, though, Shayne had one big advantage: He grew up in an artistic household.

“We had an SLR in the family as a kid that I learned how to use and got to experiment in the darkroom, which was cool,” Shayne explains. His family was also very musical, which helped prompt him to pursue music seriously. But, he says, after quite a bit of time away from the medium, he found himself drifting back to photography. Then, it was just a matter of learning and putting in the work.

Here, Shayne explains how he grew his business, and what he plans to work on next.

Tell me about you photography business. How did it come about?

I had stepped away from photography for a long time and got back into it later on and was really interested in learning a wide variety of techniques and started self-assigning projects for each week from light painting, custom bokeh shapes (Don’t know what Bokeh is? Check out our Ultimate Resource Guide here), HDR, water drop photography as well as an array of photoshop techniques. As I started posting more and more online, people started getting in touch about working together on projects, which gave me more people to play and experiment further with. Then to my surprise people started to ask about hiring me for specific jobs, which I did for a long time on the side in addition to a day job at the time. I’ve narrowed my focus since then, but that broad range of experimentation definitely taught me a lot and I still use bits and pieces of those techniques.

You walked away from a full-time job to pursue photography; what was that like? How did you feel the first day when you were a full-time photographer?

It felt great! I had a good job and was the managing director for the Toronto office of a large company and the people were amazing, but I literally walked away from that job one day and made a video for the Joey L course the next. I was mostly grateful to have the time to be able to put into doing the creative things that I wanted to do. It was also part of the idea that I wanted to make the most of my life experiences doing things that are meaningful to me and not getting caught up in the cycle of a day-to-day routine of what I felt I should be doing as a result of pressure. Bottom line: definitely very liberating!

What’s been the most challenging part so far?

Definitely getting in front of people, going out to a lot of different events and talking to absolutely everyone…all the time! It makes total sense that people can’t hire me if they don’t know I exist, so I try to develop a community around me and reach out to people constantly and to be as genuine as I can about it, which has generally worked out fairly well, but it can be difficult to access specific people sometimes that I would really like to work with. What do you love about it?

One thing I really love about it is that it’s a life style and by that I mean that it’s brought me places I would never have been and put me in contact with people I never would have met. I’m very thankful for the experiences I’ve had as a direct result of becoming a photographer.

I also see and love that we can accomplish more together. It’s very flattering when others reach out who want to help and get involved just for the experience, and I’ve been very fortunate with people who have put in time and effort to work toward a common goal together with me. As more people come out to get involved, the more we can do and the bigger a production can get. Some of the things we’ve been able to do I never would have been able to manage on my own and of course others come with some ideas that I never would have thought of. Who are your creative inspirations?

There are of course so many, but it’s so inspiring to look at work from the greats of the past like Yousuf Karsh, Arnold Newman, Irving Penn Richard Avedon, but also Ellen von Unwerth, Herb Ritts, Gregory Heisler and Paolo Roversi. It’s also amazing to see such talent coming out of very young photographers like Zhang Jingna, Joey L, Emily Soto and many others.

You collaborate a lot. What have you learned from working with other artists?

Collaborating has definitely taught me to be much more flexible. Working with others comes with a whole new set of challenges sometimes from working with fire and other elements to various types of performers and generally other styles of working and figuring out how to translate ideas into reality. Collaborating has also given me the experience of working with various medium format digital cameras as well as medium and large format film cameras, which are all fun toys to play with. I recently did a collaboration with The North American Circus Competition who generously produced a last minute Day of the Dead shoot completely just fun and loaned us their Phase One, but they’ve opened up a whole community of circus performers that I’m looking very forward to working with in future.

What’s the best advice you ever got?

There are lots of valuable pieces of advice out there, but one of them that stands out is to try and include video content where possible. I did a Red Dress Twirl shoot and the video is certainly not the highest production, but it got more response than just posting the image alone, which tells us that people have an easier time finding us if we’re including video content in addition to our still images. In fact, both Retouching Academy and SLR Lounge got in touch to do an interview after seeing the video. I actually met Megan Kennedy at CreativeLive who later became an SLR Lounge contributor and has been not only been very supportive but is also doing some amazing work lately!

What’s next up for you?

I’m excited about a few things coming up – I’m doing more and more video work and am currently working on a documentary as DOP. The story is wildly interesting and quite original, so we’re all curious to see how it all turns out in the end. I’m also shooting a completely ridiculous and slightly cheeky, but very artful moustache project that the Movember Foundation has gotten behind (funny enough with CreativeLive alumni, Zain Meghji, who’s hilarious and has been extremely supportive). I came up with an idea a couple years ago and I’m excited not only that Zain has pushed me to do it and help orchestrate it, but also that others are actually coming together to allow me run with my ridiculousness and entertain my ideas, so stay tuned for that one.

Is there anything else our audience should know?

Just that if anyone is in Toronto or ever passing through that they should feel free to get in touch anytime – especially if they love all things ridiculous like I do. 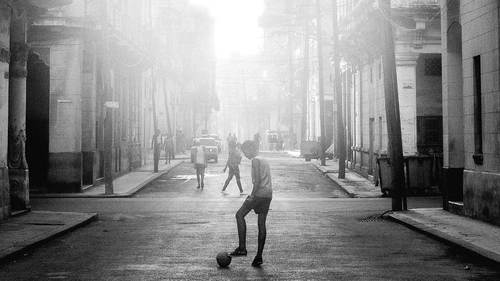 How to Make Friends When You’re a Freelancer

The call of a freelance lifestyle is a strong one. Freedom and independence, extra income, the lack of a boss,…

Doesn’t everyone want to trade in their comfortable, California lifestyle to live in a rolling box with a bed? No?…