Lesson 6 from: Be a Resilient Leader 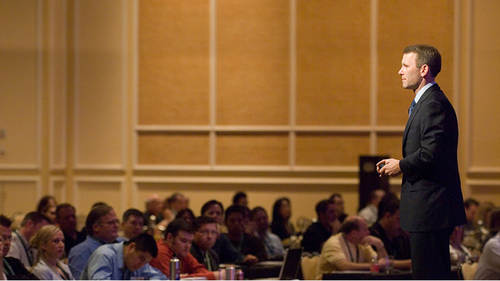 Lesson 6 from: Be a Resilient Leader

Biographies - Learn from the Past

So I want to establish that base, the bulk of the course that I teach on resilience is about holding up the mirror. Where, when, and for who do I need to be resilient? And we walk through that exercise together. What does at my best when mean? What roles do I need to be at my best? Whether that's for the non-humans that we support, for the young humans that we support, and for ourselves along the day. So now let's get into some tactics. And some of these tactics I know you've heard about, you've seen. If you've read any books on resilience these are gonna sound familiar. But the first one that I wanna talk about is positive thinking. And I actually have changed it up a little bit to be called directed focus. We'll get to that a little bit later. But I wanna tell two quick stories about how I've used positive thinking and how it's affected me in my own life. What I encourage you to do is some journaling around what I call your resilience biography about where you've used directed thinki...

ng, directed focus. So the first one is a negative, and the second one is a more positive. That's how we start, let's start here and then we'll go here. This was, I wanna call it 2007, 2008. My buddy picked me up in Ohio. We were driving to Santa Barbara for the Santa Barbara triathlon. Early in the morning, it's dark outside, we're anxious, we're excited, it's race day. My buddy who's driving, I'm passengering. He leans over and says, "Hey Jason, what do you think you're gonna place today?" Meaning first or second or third. Now, just to be all transparent, I race age group, not overall. So I'm always in that age group. And I remember I laughed out loud and I turned to my buddy and said, "Dude, I'm just gonna finish today." Hours go by, we set up for the race, we get down to the beach, sing The Star Spangled Banner, bunch of guys run into the ocean. Everybody hitting each other, we're trying to get to the first, second, third out the water, on the bike, through the run, come across the finish line. About an hour after the race I go look at the scores, I go look at the times and I had missed placing on the stage by 17 seconds. And I had this thought in my mind, do you know how hard the universe had to work to make good on what I said I wanted? Over the course of a swim, a bike, a run, two transitions in between, the universe had to do all kinds of things to hold me 17 seconds behind. Fast forward 30 days, we're on our way to the Carpenteria triathlon, which is another race that Kwanna picks me up, we're driving to that one. He turns to me and he says, "How do you think you're gonna do today?" I said, "Top three." (audience laughing) And that became the first race I ever stood on the podium at. Now, was it that I had trained for it, prepared for it, was ready for it? Or was it that I directed my focus toward what I needed from my world? Quite frankly, I don't care. All I know is that I can think my way in and out of different things. Where are you gonna point your focus? Because wherever you point it, I call that practice. Now when I was a kid, I was told that practice makes, help me out everybody, practice makes-- Perfect. So they lied to you too, that's okay. (laughing) My mom loves me, I know. She did when I was a kid. She used to tell me that practice makes perfect, so there I was practicing guitar and practicing baseball, but through my entire high school and college career the San Francisco Giants never called and Eddie Van Halen didn't send a message. Even though I practiced, I didn't become perfect but I uncovered, discovered and now I teach what practice actually makes. And practice makes three things in descending order of worry, by the way. So if you say, hey Jason, what does practice make? I'll go, well it makes three things and at the end I'm really worried. First, practice makes comfortable. And this is negative and positive, by the way. I like to use this example because it's real for me. Does anybody know anybody who bites their fingernails? That's amazing to me. They will practice biting their fingernails to the quick, To the quick, it means it bleeds quick. That's amazing to me; it's comfortable for them to do that. The next thing that practice makes is normal, is normal. This is a fun one, not you. How many of you have a friend, a colleague, a co-worker, someone that you know, someone that you may even love, how many of you know someone who is always late? Always late no matter what you do. Have you started lying to them yet, by the way? Hey, we're going to that thing. What time does it start? 4:00 (laughing) because if you tell them the real time they're gonna show up late and you're not gonna be able to get the table especially in the Bay area. Practice makes normal to the point that we start excusing around for that normalcy. And then the one that I worry about the most, and I'll use this question, and this may fall appropriately for some of you either watching or here in the studio, anyone ever quit a job? Anyone ever quit a job? So for those of you who raised their hands, and by the way in the studio we had like of the 10 people, 12 people raise their hands. For those of us who quit the job, quit a job, research shows, now you could be unique, research shows people don't quit work. They quit people they work with. If most people go back and look at the jobs they left, it wasn't the work they left. Research shows it was the people they worked with. So I look around organizations that we work with, coach with, and consult with and I asked what's accepted around here? Is a boss who only finds what's wrong accepted? Is a team who's always running late accepted? Is a client who's always yelling at me accepted? And it's interesting, because what we practice magnifies. And so I invite anybody in the audience and anybody watching today to really take a look at where you're pointing. More than your positive thinking, your positive focus. So I like to give a positive focus activity. I'm just gonna unfold some of the tactics that we've used to build resilience. Really it's almost like how do I build resilience before I need it so that when something comes I ease my way through.

Be a Resilient Leader Worksheet
Adobe Stock Get Started Download