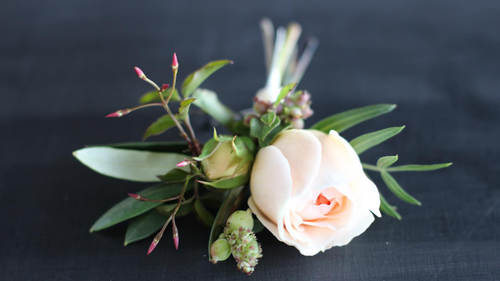 So I'm just putting some of my flowers together to show you how to make an attendant bouquet um, but before we start putting it together, I just want to show you some key hand positions that you have to get familiar with when you're making a bouquet um, all of the flowers that you used to have to insert them at a angle in your hand and then you're going to be twisting and turning your hand kind of like you're opening a jar so that's really important to get comfortable with those hand motions, so inserting an angle and then twisting and turning the flowers like you're opening a jar um and it's not going to be easy at first, the great thing about this is that you don't have to cut the flowers until you're happy with how the bouquet looks, so you, khun, set them all down and start over and practice with your flowers a little bit until you're really comfortable with it, so the they're all still prepared by you've stripped him of the green and everything. First, all the flowers had to be pr...