Lesson 7 from: Branding Strategies to Ignite Your Marketing 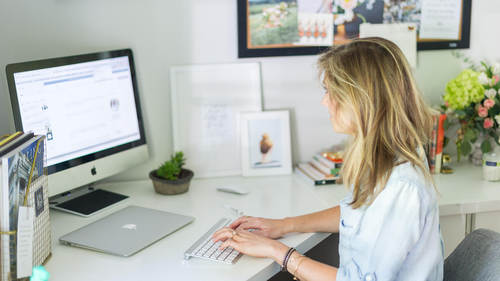 Lesson 7 from: Branding Strategies to Ignite Your Marketing

Welcome, I'm Natalie Franke. I am the co-founder of the Rising Tide Society and head of community here at HoneyBook, and I'm so excited and so honored to be sitting here today with three extraordinary women and moderating a panel where we're gonna be talking about all things entrepreneurship. So as we get started, I want to take a moment and allow each of these amazingly accomplished business owners to share a little bit more about themselves. So we'll start with you, Christina. Thanks, Natalie. Hi, everybody, I'm Christina Scalera. I am an attorney, and I am the only founder of The Contract Shop where we provide contract templates to HoneyBook and other entrepreneurs in different various creative disciplines. Hey there, my name is Ashlyn Carter. I'm a calligrapher and copywriter at Ashlyn Writes where I help creative small business owners sell more with their words. Hello, my name is Dominique Broadway. I'm an award-winning financial planner, personal finance expert, and the fou...

Ashlyn,&#160;a <a href="https://www.honeybook.com/client-solutions-r?optimizely_x=10658027053&amp;utm_source=creativelive&amp;utm_medium=cpc&amp;utm_campaign=ashlyncarterpage1&amp;discountCode=CL30">HoneyBook</a> educator, serves creatives as a copywriter &amp; calligrapher. She left her job as a publicist to go full-time with her calligraphy business&#8212;and realized there were a lot of creative entrepreneurs fumbling with their message
SEE INSTRUCTOR'S CLASSES

What a great class and Ashlyn really knows her stuff! Thank you for this super helpful information!

Very helpful and informative! Ashlyn does a really great job! So much ethusiasm, lots of good advice and so many simple but handy tips!