Build an Etsy Storefront That Sells 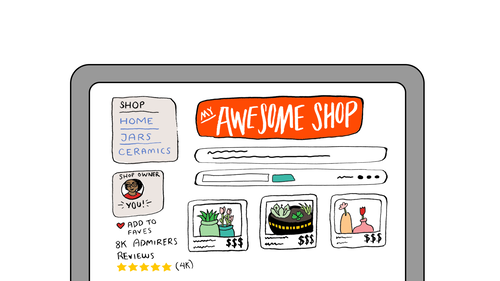 Build an Etsy Storefront That Sells

We're gonna talk next about gaining traffic on Etsy. And I get to welcome Tim Adam to join us today. Whenever we're ready. Hi Tim. Hey Lisa how's it going everybody? Hi Tim you're coming through the rafters here. It's awesome. That is awesome. So nice to have you here today. Thank you for joining us. Yeah I'm happy to be here. So I just want to let you guys know. You're going to be staring at my picture as I'm talking. And then I'll be doing some screen sharing in a little bit. But yeah Lisa I'm really excited to be here. Talk about some Etsy traffic and SEO. And some really technical stuff, that you guys are gonna love. Okay great. Could you introduce Tim. And tell us a little bit about what he does? Absolutely. Well I'm actually gonna, I've said Tim Adam he's well known in the Etsy community. He's well known in the hand made world. He has a blog called handmadeology.com, and I'm gonna actually throw that to Tim. I would love Tim for you to tell everybody. I feel like ...

This course is part of the Turn Your Etsy Shop Into a Sales Machine Bundle.

Bringing your creative business to Etsy® can tap you into the wide online market, but it isn’t as simple as setting the product of your hard work in the store window and waiting for customers to wander by. To make your online storefront irresistible to customers, you have to learn to showcase your products effectively.

Join creative marketing guru Lisa Jacobs for step-by-step instruction on how to use Etsy as it’s meant to be used - as a sales platform.
In this class, you’ll learn:

The skills you will learn in this class will give your business new energy, especially if you’re struggling to stand out in the crowded online marketplace or dealing with long droughts without a sale. Make selling your products on Etsy easy and intuitive.

Overall, I thought this presentation was filled with lots of useful information about creating an Etsy store. I am new to Etsy so this was a good introduction to a lot of things I did not know that... I needed to learn about. I also pricked up a lit of good tips especilly from the QAs. However, the organization of the presentation was a little confusing. The slides noted general topics but the lecture tended to meander. I found myself writing a lot down but I will have to go back later and try to re-organize my notes to put everything together. I viewed a free broadcast so I did not have the course materials to use as a guide.

Please have Tim Adam from Handmadeology come teach a class or two or three. That was the best part of this class! Seems like the 3 classes that Lisa teaches could be combined into a two day class. So much repeat info between the classes. Time is valuable when you are an entrepreneur. Basic info is out there...focus on the next level info to present.

I would recommend this course with 2 caveats: 1) The course was quite long for online viewing and it could have been significantly streamlined without losing any effective content. 2) The module with Tim Adam would have been better to have him on a live feed with GoToMeeting or something like that rather than just his picture. This was the one module that could have benefited from spending a little time explaining things.