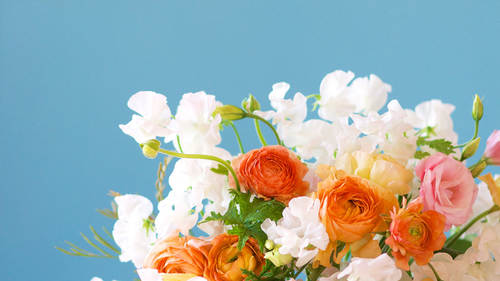 So I have this beautiful one thing that I'm saving for last because I want to make sure that my pure mock orange doesn't get understated and hidden by this beautiful peony that I'm going to use later so I'm going to save this um inside my bucket for my last touches where I think I might need them and then do you ladies have your let's ok, let me get some roses for everyone they're so lucky to have roses from your garden how cool is that e I look at this this is like amazing thing david austin rose sales are going to be off off the chart that obviously if they're not already and you're handling them in a certain way can you talk through that? Well, I just want to make sure that they don't I don't bruise them or you know the pack them too tight next each other so that they hurt each other one way or another I try to keep him on different fingers if I can while holding them uh let's see? So I'll just come over to you guys and give you some we'll start with thes three for you this you don'...

From the first dance to the last bite of cake, wedding receptions are all about the little details that make the evening shine, and gorgeous centerpieces bring the whole look together.

In Build Your Wedding Centerpieces, Kiana Underwood teaches the art of creating luscious, asymmetrical centerpieces. You’ll learn about selecting unique floral materials and preparing them so the actual arranging is more fun and seamless and your flowers look and stay fresher longer. You’ll also learn about choosing the right vessel for your table size and the overall look you want to create.

By the end of this class, you’ll be ready to create gorgeous, innovative centerpieces that complement your reception perfectly.