Lighting The Pumpkin With LEDs 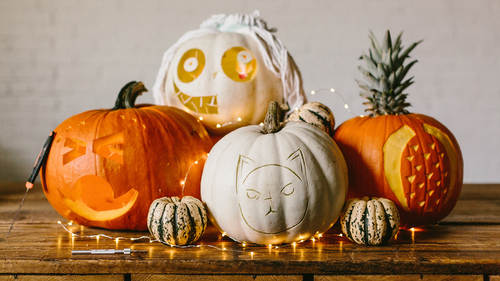 Lighting The Pumpkin With LEDs

So now we're gonna show you how you can light your pumpkin. We've had so much fun creating these pumpkins, of course you've gotta light them and that can create a really cool and dramatic effect. One of the great things is now with the advent of LED lights, it makes your lighting options just incredible. Before, you'd put a candle in there or sometimes you'd run Christmas lights and I kind of like the idea of Christmas lights. They now have the LED lights that are like the individual bulbs, like the old, old Christmas lights and that's great if you ever wanna put them in the back of a pumpkin. I like to do a whole series of pumpkins, kinda smaller ones, and it's a great way to light them. Just go ahead and cut little holes in the back and just put the bulbs in. But some of the other ones that we have, and we got these on Amazon, these are really simple. This one's cool because it's a three mode light. It's an LED so it's just got the little strobe that you have, plus it also has a litt...

Get into the spirit of the Halloween season and learn how to carve impressive Jack-O-Lanterns with Jason Hoppe in Creative Pumpkin Carving Ideas, Patterns, and Tools.

Jason will demonstrate basic and advanced techniques for transforming pumpkins into impressive Jack-O-Lantern displays.
You’ll learn:
Jason will review which tools to invest in and how safely use them for the carving you want to create. You’ll also learn tips and tricks for carving small details and adding personality with household props. Plus, you’ll get access to a one-of-a-kind collection of custom pumpkin carving templates you can print and use again and again.
Creative Pumpkin Carving Ideas, Patterns, and Tools with Jason Hoppe will teach you the art of pumpkin carving and prepare you with the skills you need to make a Jack-O-Lantern that impresses. You’ll master the techniques necessary for creating a carved pumpkin that impresses passersby and earns you major bragging rights among your friends.

This video had some really good and cool ideas/techniques, however, you should do a zoom into the tools when you show them. I'd like to see close up the shape of each tool you demonstrated. Otherwise, it was fun!

I learned some great hacks and tricks. Going to carve my pumpkin this year with more enthusiasm! BTW something I thought might be helpful is to push pins to hold stencil designs on pumpkin since tape doesn't work.