Lesson 6 from: Customize Your Embroidery 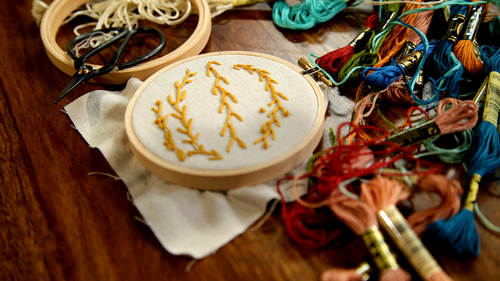 Lesson 6 from: Customize Your Embroidery

So I went ahead and decided I was going to use french not because I love them and if you took the answer, of course, you know, we spent a little bit of time on them, so I chose a pallet of a couple different colors, including the one that I had used for the stitch, just in a few places to kind of work it back in. And what I like about this project switching from a hoop to a square is that when you use the boundary of the hoop, even if you guys wanted to do a border all along the hoop, you're getting this dimension of having this has even this house that you can see there's a little bit of roundness here into the randomness of where the knots were placed. So I like what that does when you remove the hoop and then you frame it a square, it gives you another dimension to the design. So in order to get that effect, I placed the knot in different places. But I also made sure that I placed some nods up against the edges of the hoop so that you really got a sense that there might be a differe...

nt shape or a different organization to what I was doing going on there. So I'll show you some of how I did that, and then the traditional french not as we talk about in the intro class is wrapping the needle around, wrapping the threat around the needle twice and I'm not even sure I can see there's a couple places where did that maybe here and maybe up here but most of the nods I think I rapped about five times or so his larger ones so this one's five and I'm putting this one raid against the edge of the hoop and another way you could emphasize sort of the dichotomy of the circular shapers is the square shape is if again you wanted to do a border like here we did hear this backstage border around where the hoop is I'll show you how that looks when you remove this so you can see so if this was flattened square and kind of see the dimension you would get from that it's pretty nice she could do something like that along the edge you could also take here's a feather stitch you could do feather stitch around the edges like that to change touch anything around the edge to create that circle or even partway up would be really beautiful the trophy branches something like that I think I'll do a little to a little chain stretch here so you'll see when we're doing the finishing work and we removed the hoop that this is going to have a really nice little circular feel to it up against that square ok, I'm going to come over and see how everyone's doing and then we're going to start on the finishing work. When you walk you through how to take this out of the hoop, stretch it on the canvas. I'm sure you're a few little grumpy artist tricks. Is that working out? So I did that one. Oh, that looks great. Are you happy with that? I think so. I might exist. Still. Okay. Okay. Okay. Yeah. Good idea. Alex. Thanks. E. I love it. Great. Trying to fill in the whole thing with with novel pinks stuff. I love it. Perfect. Are you doing rachel? Good. Great. You talk way made two spooks. I love it. Okay. Yeah. Thiss looks great. So that's the way. And so this is I guess I did a backstage. It looks, it looks good. Whatever you did, it looks good. I mean it's like, well, you can read it. Yeah, yeah, you're hitting all the marks. Yeah, thank you.