How to Design Business Cards 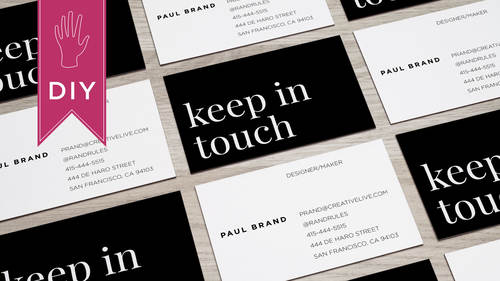 How to Design Business Cards

Topography is the art of choosing letter forms and arranging them on a page it's a huge part of graphic design so choose your type wisely this is crucial to a good design no mistakes can be made on this part of your card let's take a look at some checklists when it comes to typography the's air things to consider is it a well crafted typeface designed by an expert? Can you see it it's small sizes so you you could get really small with your point sizes on a card starting at seven point five going up to ten but anything larger can get clunkier it does work in some cases but remember small works well depends on the design of the font to some don't look ledge a bill a seven point five we'll talk more about that later is it available in a variety of weights? Is it available in a variety of styles? Does it fit the contents stylistically and most importantly do you love it so one thing I love about my card is that's my favorite front right now so just looking at it makes me happy and if you'r...

Go to any professional networking event and you’ll still see printed business cards in circulation. Business cards make exchanging the full-range of contact information easy and well-designed ones make a lasting first impression. Learn to design your own in How to Design Business Cards with Lara McCormick.

Lara will teach you everything you need to know to create well-designed, attention-grabbing business cards using Adobe Illustrator or InDesign.

You’ll get tips on choosing between standard or custom sizes and how orientation and spacing impacts readability. Lara will show you where to find unique typefaces and she’ll offer tips on printing orders of all sizes. You’ll also get a collection of business card templates you can customize.

Paper is sticky - make the most out of your next introduction by leaving behind a beautifully-designed custom business card that represents your personal brand.

The DIY series is for creatives who want to create designs for themselves. The classes are geared toward beginners who aren’t necessarily ‘designers’, but need materials to represent themselves (or their small business). Classes labeled DIY are project-specific, under three hours in length, and priced affordably. Learn to design what you need quickly and easily.

Hey Lara! I just checked out your course on CL, How to Design Business Cards, and absolutely loved it! Everything about the course was awesome from content, information, presentation, and your personality. Would you please do more courses? You have a wealth on knowledge, I can tell, and with your easy-going presentation it is a great combo. I would love you to do a course on InDesign or simply on design with various projects from business cards, posters, brochures, etc. Anyway, thank you for that course. You rock! Thank you for your time.

I'm designing my first business card and Lara took it step by step so clearly that I've got something I can be proud of right out of the gate. She showed great strategies to make them professional and attractive and bonus ideas about how to get people to keep them around for reference. That's pure genius!