Lesson 1 from: How to Build Confidence and Be More Social 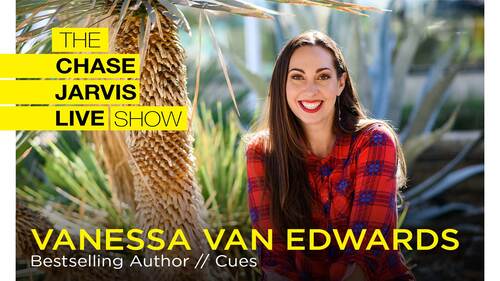 Lesson 1 from: How to Build Confidence and Be More Social

1. How to Build Confidence and Be More Social with Vanessa Van Edwards

Hey everybody what's up it's Chase. Welcome to new episode of the Chase Jarvis Live Show here on CreativeLive. The show where I sit down with amazing humans, unpack their brains with the goal of helping you live your dreams. Today's guest is Vanessa Van Edwards and if you have ever wanted to decode all those little squints, those little facial expressions, phrases, people's actions and words, if you've ever wanted to decode that, find out what it means and improve your skills, your ability to respond in the moment. This episode is for you. If you're not familiar with Vanessa's work, she is a national bestselling author of a number of books. Previously, a book called 'Captivate The Science of Succeeding With people' and her new book called 'Cues', which is Mastering The Secret Language of Charismatic Communication. She is a legend, she's got a research lab called the science of people. I often recommend when asked who would be a great guest speaker at a conference or in a leadership gro...

Vanessa has some very interesting information that she shares and I'm enjoying another class on CreativeLive that she gave earlier. Very curious what she shares about cues here in this talk, and specifically the cue for contempt, which seems to be a big indicator for failing marriages/relationships. But where does contempt start? It starts with a thought building upon another thought where we don't forgive and we keep records of wrongs. Instead of being committed to forgive, to work through things, to love (a choice/commitment many times and not a just feeling like many think it is) above all else, then we are setting ourselves up for contempt/bitterness and that's a root that stays there until someone can forgive and let go. I think Vanessa has made some powerful observations and I'm sure her class and books will share much more, but sometimes this feels a little manipulative in the sense that I have to perform a certain way to get what I want from you. We want to make good connections with others, but are we so starved for a approval that we can't be ourselves? I'm all about continuous improvement and growth, but the less I worry about what others think of me and the more I am myself, the freer I feel. My aim is always to show others true respect, warmth (even love on some appropriate level), and value them, but whether they like me or not I guess is up to them. I can't let that change me unless I see that I can improve and grow in a positive way by changing. I know all people value things differently, but that's where my peace is at. Anyway, looking forward to more from Vanessa. She's a great observer and teacher.